She held his hand. He was conscious, sitting up and dressed.

‘How do you feel today son?’ she asked.

The young man looked at his mother with empty eyes, with no sign of recognition, totally unresponsive. Every day for fourteen, she had driven the fifty miles alone, not knowing what she would find in the critical care unit, where he recovered from a massive overdose.

She held it together until she left that day, to meet her friend.

Later, it was the smile on her friend’s face, so caring, that broke her. Two weeks’ worth of tears fell at once. 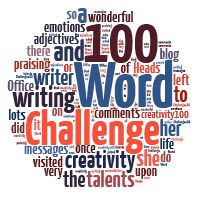 It’s been ages since I’ve entered Julia’s 100 Word Challenge for Grown Ups, but this week with ‘the smile’ I just had to join in.

Julia http://jfb57.wordpress.com/2012/06/18/100-word-challenge-for-grown-ups-week46/ thinks her prompt  . . . in the dark recess of my mind . . . is straightforward this week, well not for my impoverished mind! Equally challenging will be making this page line up as I want it to but here goes.

In the dark recess of my mind, drowning, overwrought and burdened

a brand new demon idles there but

The memory cannot linger forever. Forks of light slash through clouds with

intent to throw open the path

Of hallucinatory dervish spinning a reel, reaching a hand to heaven, stabbing

My sanguine fluid put on hold, damned and damned forever to ease my tormented

Crying, why? Depression.  The big saucer eyes red and lower eyelids exposed and vulnerable looking like raw meat, angry, red and sore. The skin on his face was prickly with grey stubble, dry unkempt and with traces of white soap. The ruddy skin of the outdoors worker and long -term drinker. Fleshy folds of jowls, mouth loose, narrow lips. Dentures were in the pot beside the bed instead of in his mouth, so that the structure was gone from his face. He’d put them in and when he smiled he looked lovely but he played with them with his tongue, pushing them up down, in and out of his mouth and scary to a little child, who thought they had a life of their own and would bite by themselves.

As he aged there was dribble from that slack mouth and corners were cracked and sore.  But mostly it was the crying. Always there was pain, headache, debilitating agony all over his head. No drugs worked and he had lots of those, all the anti-depressants of the day were tried. The doctors used him as a guinea pig. He had Valium, Mogadon, and Triptizol and reporting side effects he changed them frequently never allowing any time to get into his system as they gave him headaches, made him groggy, kept him awake – whatever he went from one to the other and then back again.

Occasionally some crisis sent him to the trick cyclist hospital where he stayed for a few weeks. Sometimes that meant they gave him electro convulsive therapy which frightened him terribly and he would cry even more. He was frightened most of the time. Of death, of what was and might be going to happen to him.

Back to him. Those nasty hospitals, old style Victorian buildings that began as lunatic asylums with people that had been there for decades, padded rooms and strait jackets for those who couldn’t be controlled – for whose safety? The child visited and was afraid of him and the other patients. She was very sad but with no way of expressing any emotion, she took it back inside herself where it festered for half a lifetime and could easily have caused her to travel the same narrow, dark tunnel of despair. Fear, hindsight and education gave her some understanding of the possibility land he inhabited. He never went to the war in 1939, although he was twenty seven at the time, he was supposedly not fit, because he had a cycling accident, where he ‘cracked his head open’ and they put in a steel plate. Would that have been likely in the 1930’s? Did such procedures exist back then? If not it would have taken some imagination to conjure that one up.

So, no war for him, he joined the Home Guard and there were remembered whisperings that he had been called a coward. Or was he? Was that maybe something seen on a black and white Sunday Matinee in the 60’s? That war avoiders were called ‘yellow’? So that bicycle accident may have caused damage to his nervous system and lifelong mental illness.

He was a simple soul but he taught her about his small natural world. Look out for adders they can kill, how to dig a trench and plant potatoes, sowing and pricking out seeds, putting salt around slugs and watching them sizzle or how to tell a plant from a weed. When she was little he worked on the land. Each day he got on his bike and rode the mile to get there with sandwiches packed in greaseproof paper and a paper bag – several times re-used. There was no money so they were scantily filled with the cheapest mild cheddar which was always ‘tasteless muck’, dripping – from some scrappy roast dinner  kept in a china pudding basin on the cold shelf of the larder because there was no fridge, or streaky bacon that was invariably ‘salt as brine’. He complained all the time, nothing was ever good.

Because he hated riding his bike in all weathers he was grumpy and she thought that he had returned from a long journey each day, it was only as an adult when her world shrunk that she realised just how close the farm was to home. The farm owners were good to the family; they tolerated the fact that most weeks he would have a sick day, sometimes two. He only left when they sold up and retired. Perhaps it’s surprising that he rode his bike at all when falling from one had caused him so many problems. It was the victim of many punctures and frequent visits were made to the cycle repair shop for a puncture kit. Occasionally great disaster fell when an inner tube or tyre had to be replaced, a major expense. Spoons would be used to lever the tyre on and off the wheel. The child longed for a bike of her own. She would beg for a ride on his but he wasn’t often in the mood to lead her round on it. It was huge, dark green and very heavy. The cross bar prevented her from getting on independently but she kept trying right until her teens when he had no use for it anymore. Then she would wheel it across the road to the pub forecourt, lower it sideways enough to get her leg across and leap on but could never sit on the seat and reach the peddles. She has vivid memory of falling on the crossbar, agony for her warm flesh on the solid cold steel. To this day she is a very poor cyclist.

It’s strange that I’m writing this on Father’s day, I woke up this morning thinking of him and there are lots of stories I could write. For the first ten or so years of my life he was dad and then for the next thirty I didn’t know who dad was. And then Pa Claudie was found, as was a big chunk of myself. So where are they this Father’s day? Lost to me for good this time, but I like to think they are watching over me somewhere and feeling some pride. Bless you both.