For the last few days the hobbit has been arriving at the office looking increasingly wonky. Have you ever seen an ancient black and white movie starring Boris Karloff as the mummy? Well that’s how the hobbit was walking. Being a hobbit and inhabiting an entirely wrong world where no-one was free to cast a healing spell, he has been suffering, noisily. And enjoying the sympathetic attention of the pretty audit ladies, who were visiting the department. How has he acquired this painful condition? Well it could be, that not only does he spend his working days in front of a PC, but also because he has a portfolio of shares to manage, he hunches over his home PC until his head crashing onto the key board wakes him up. His eyes are as red as the mummy’s might have been, if the film above had been colour.

I don’t believe this is the real cause though, because on Friday I witnessed something strange. Hobbit cleaned his desk for the first time ever. 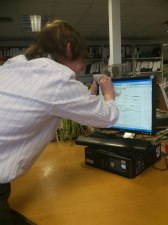 I don’t know if you remember that I told you about his car? How it’s interior looks and smells like it’s been dredged up from somewhere very unpleasant? Well, this leads me to believe that it’s the first time he has ever cleaned anything. It may have caused this irreparable damage to his neck and shoulder.

Hobbit has been asking the women to massage his pain away and one kind lady did help, not me of course! I sent him scuttling off to buy some anti inflammatory. Of course he couldn’t reach the site of the pain and asked for help to apply it. In an office with sixteen people, you can imagine the response.

Today he muttered about getting some professional help in the form of a chiropractor, but then talked himself back out of it because of the cost – all his money is tied up in shares. I remembered that our noble employer offers a free physio service and helped him to find the number. He stalled. ‘Go on call them, the sooner you do the sooner you’ll get sorted.’ ‘Not with everyone listening, I’ll do it later.’ I think he’s scared it might hurt. Or that it might be a dragon of a physio. Or that it might be a very attractive physio. He won’t go, he is happy in his suffering.

So why was he cleaning his desk? He has moved and someone new is sitting beside me. Hobbit is  8 feet behind me and I miss him and his Hobbity ways, and his socks.