On our second full day in Florence we decided to do part of a walk in a guide book.  We weren’t following it exactly because it didn’t make sense. Okay I’ll confess, the first part was too close to our hotel, so we skipped it. In doing so, we emerged on the river bank  further east than the walk, so took a slight diversion. Where’s the fun in exploring a new city without going up some back alleys?

We emerged on Piazza Santa Maria Del Carmine, where the church of the same name had a rather dull exterior, and had a peep inside. 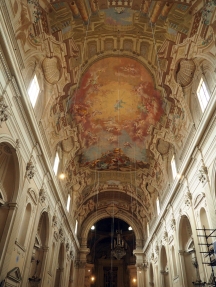 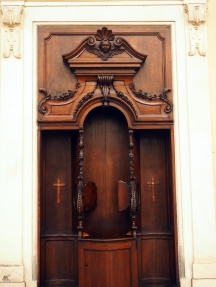 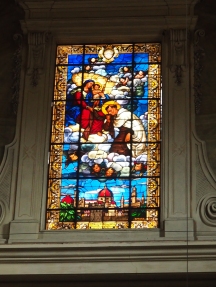 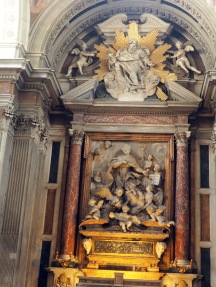 This church of the Carmelite order was built in 1268, but was damaged by fire in 1771 and the interior rebuilt in the Rococo style 11 years later. It was nicer inside than out.

We got our bearings back and headed for the Via Santo Spirito, occasionally getting distracted, wondering what was up there or around that corner. 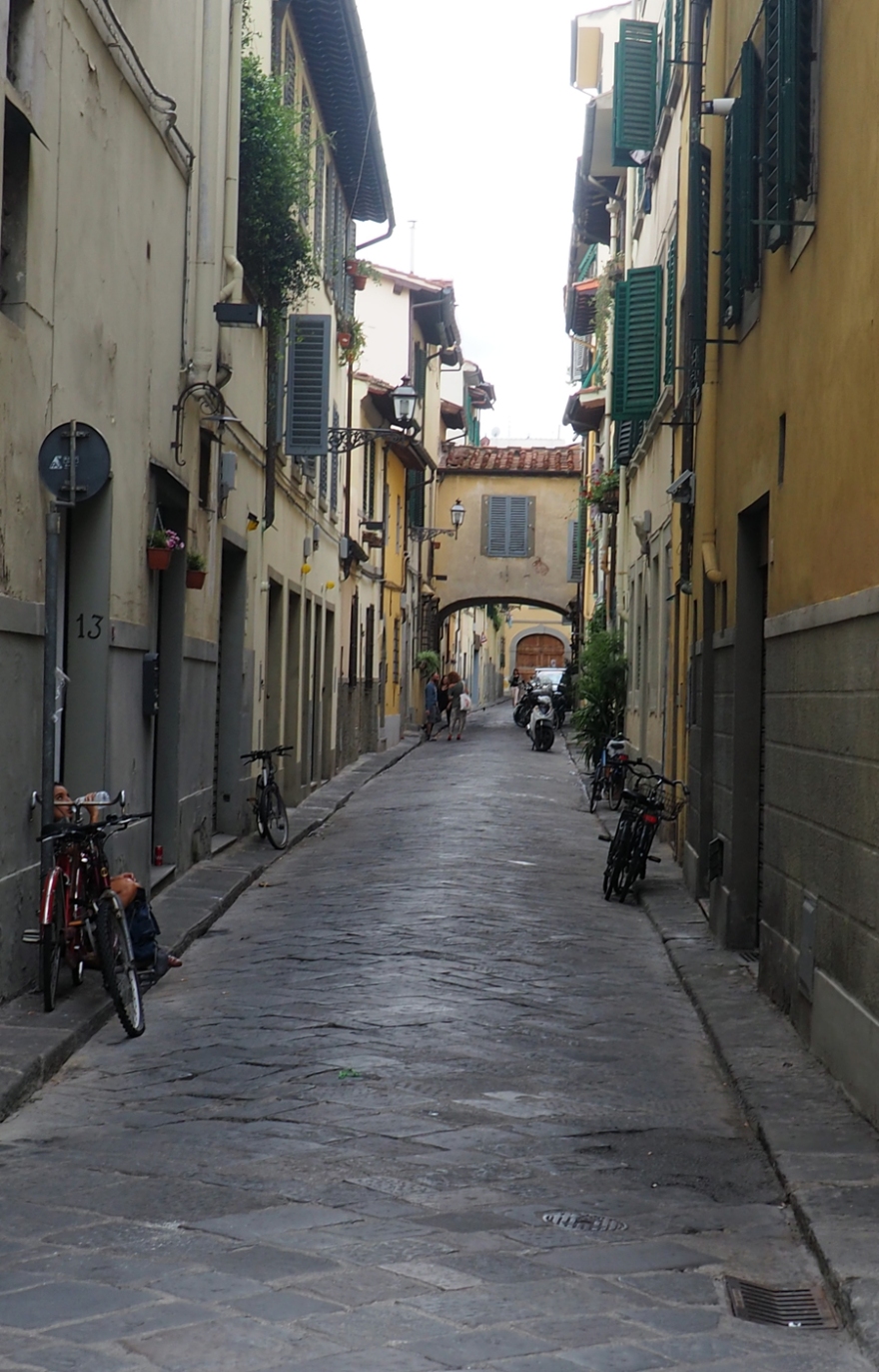 One of the things we did find from the walk description, was this pretty stone tabernacle from the 14th century. The fresco of the Madonna with Child and the Saints Paolo and Gerolamo) is reputed to be the work of Bicci di Lorenzo. The little figure between the  saints is the person who the commissioned the fresco. 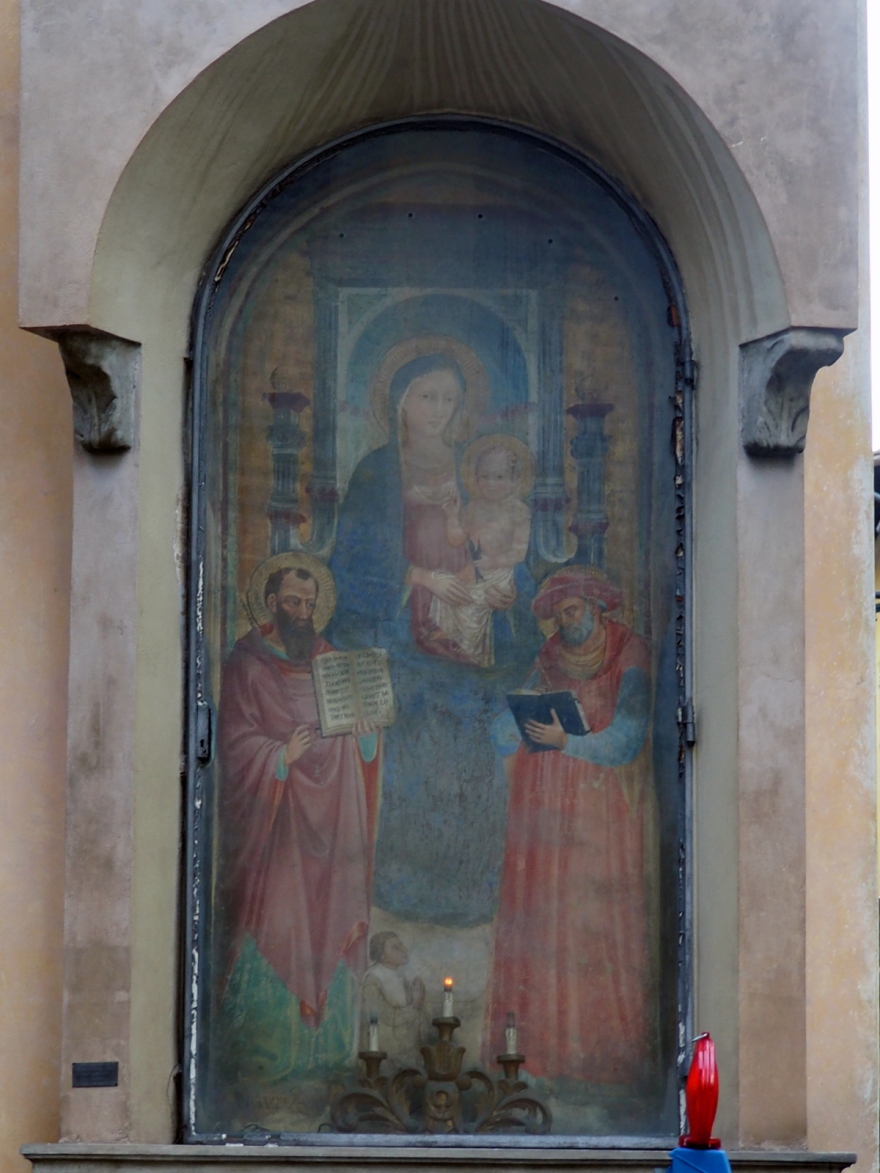 A sharp shower sent us rushing for an espresso and a bit of a sit down. 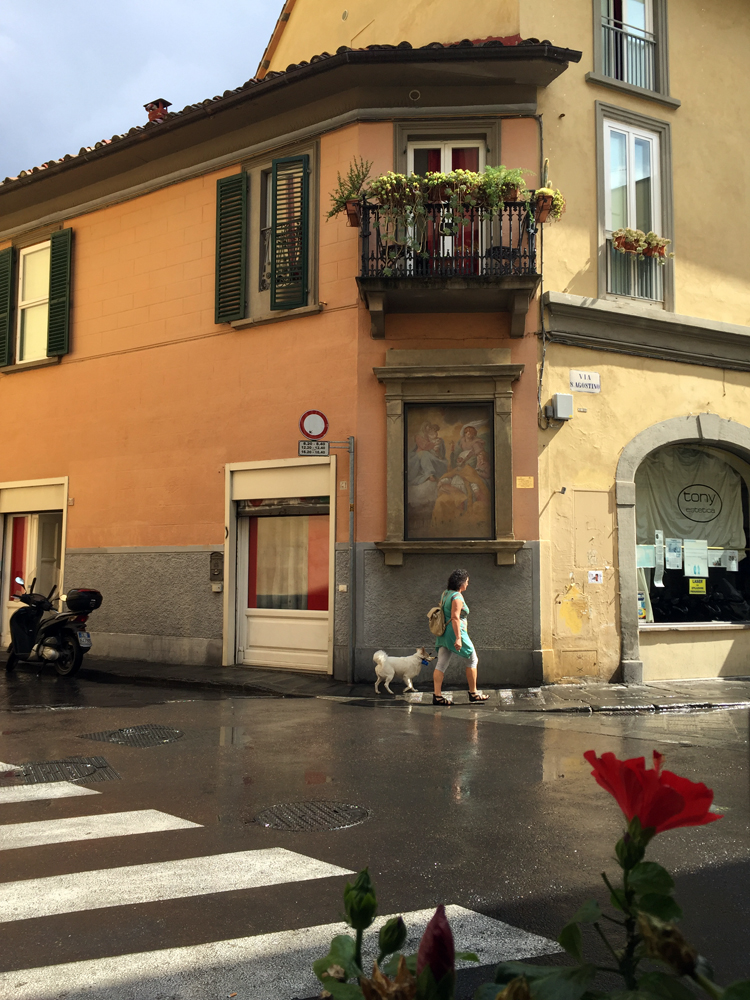 Then we were off again. 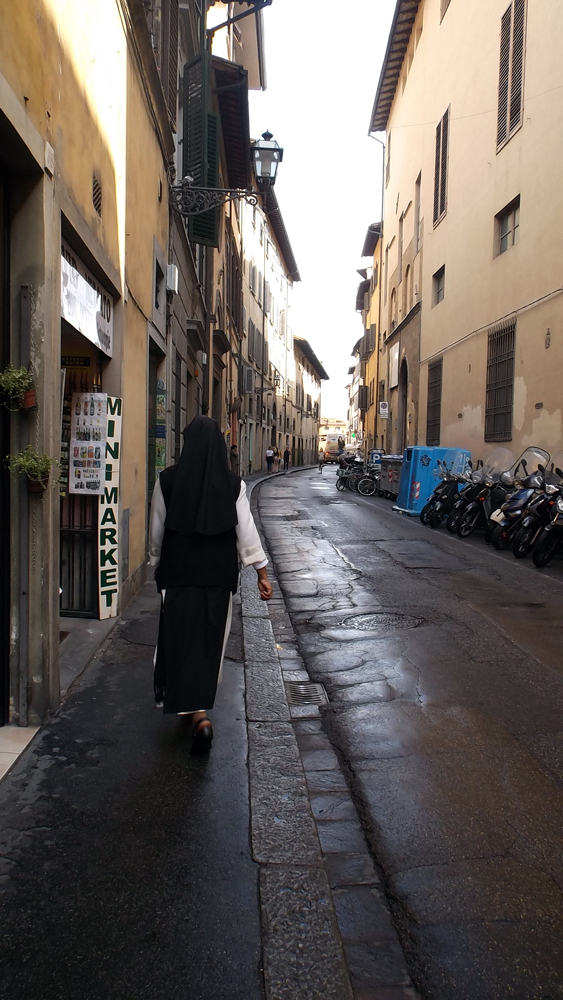 Towards Santa Spirito, the heart of this creative, bohemian area. 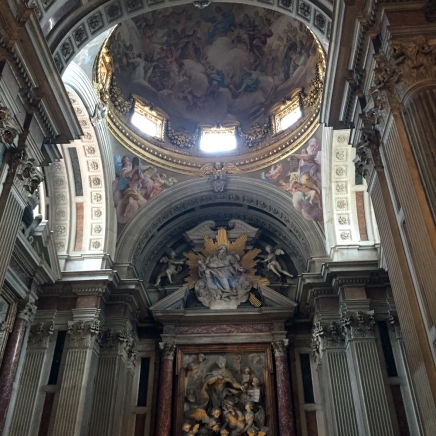 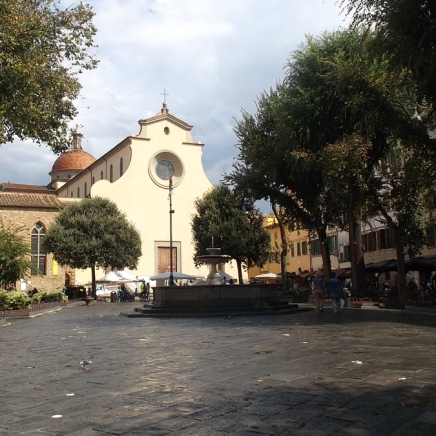 Oltrarno is the home of many artisan workshops, including the fabulous shop I showed you last week. Surprises and smiles are around every corner. 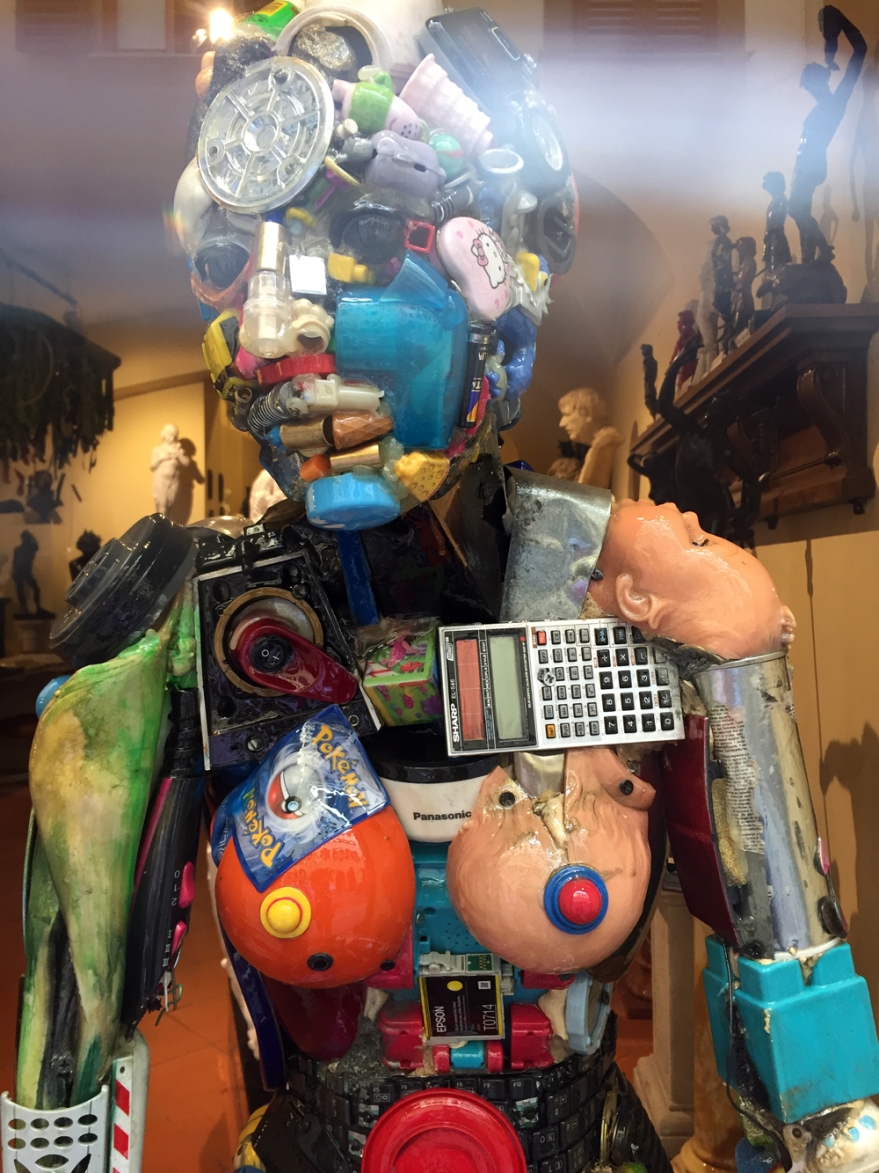 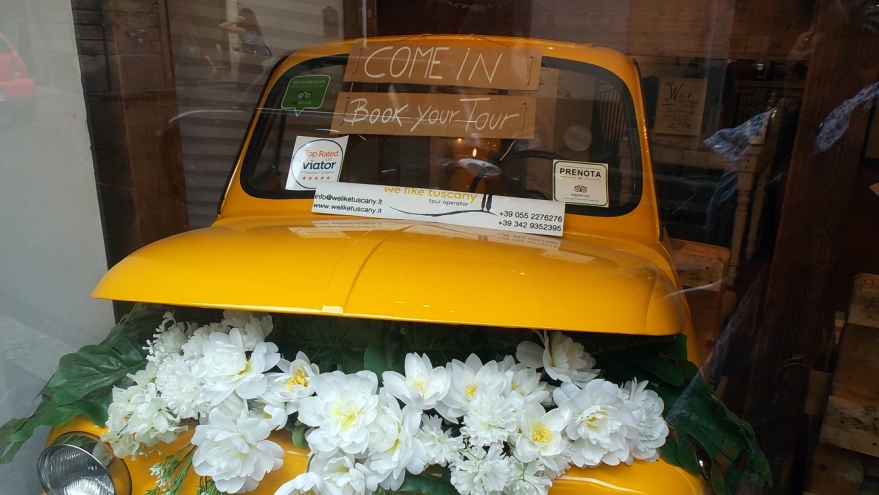 Close to a nursery school, we came across this moving sculpture, in honour of the Armenian genocide. 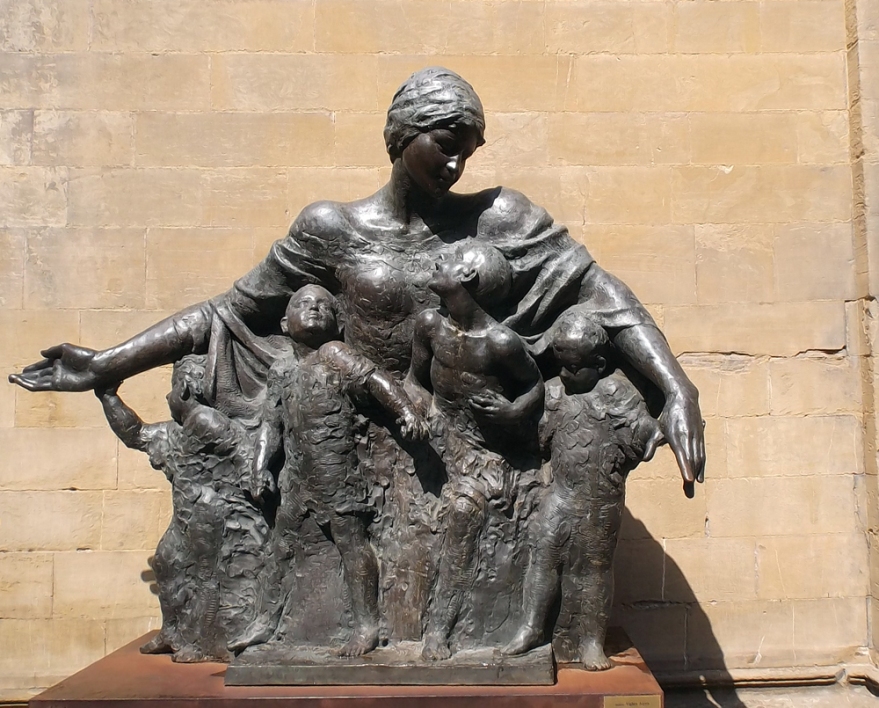 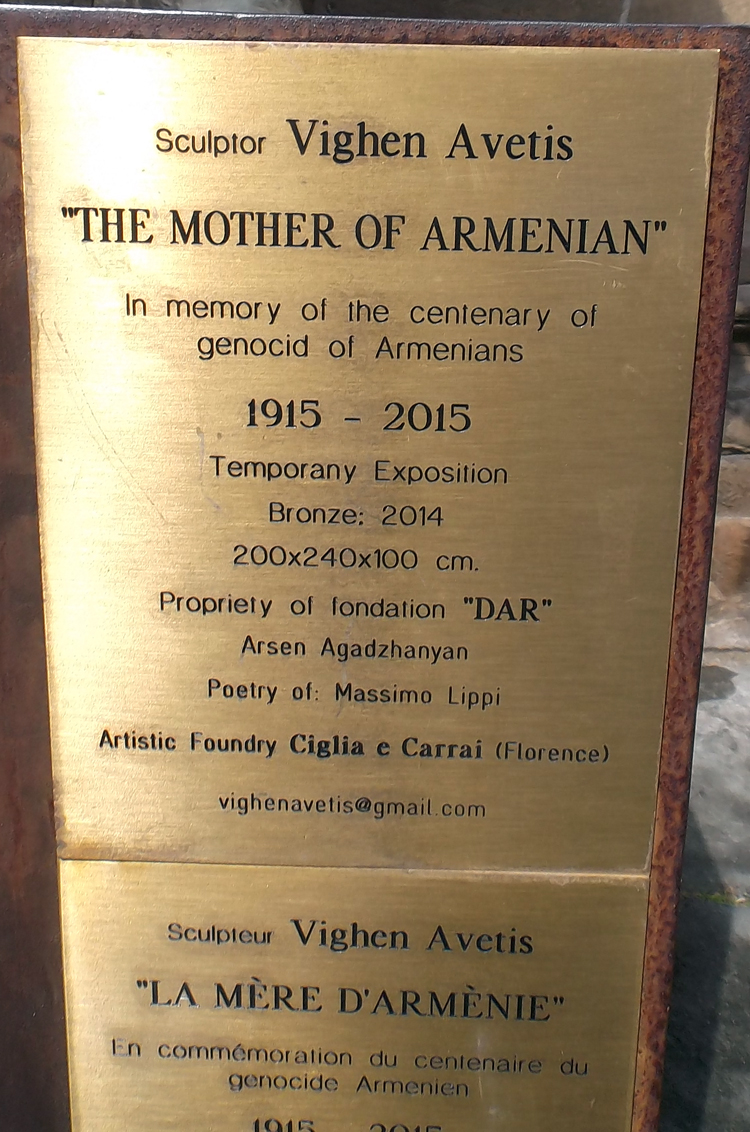 Let us not forget.

Back to the streets and we were drifting south to what we thought was a secondary entrance to Boboli gardens. 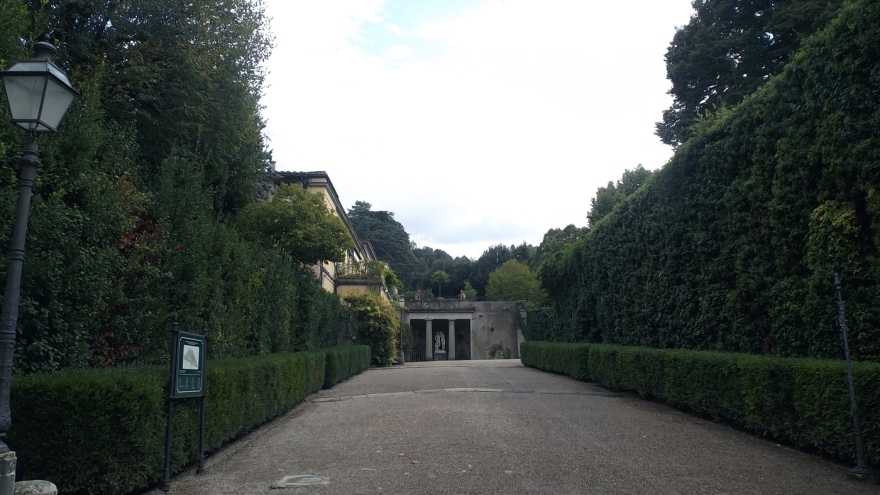 So we turned tail towards the direction of the river, passing elegant gates leading to secluded mansions. 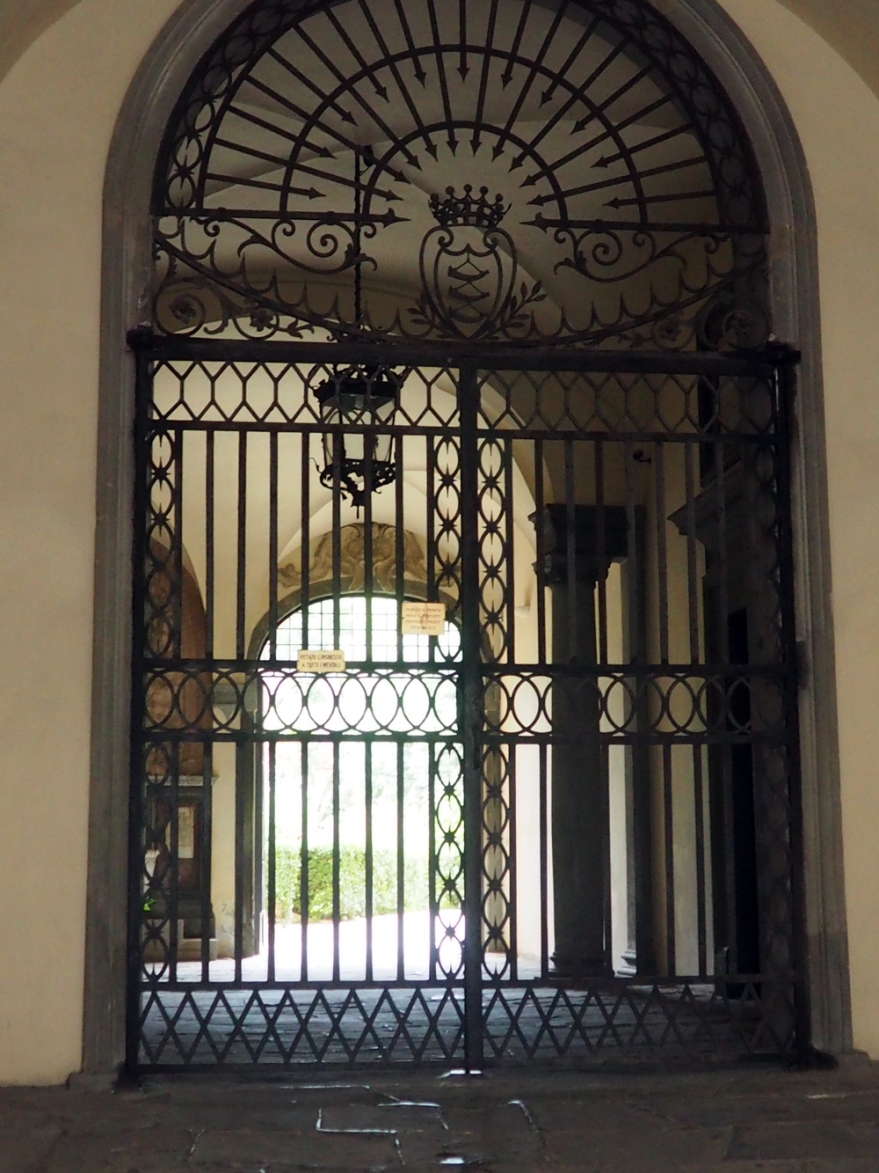 We didn’t fetch up where we expected even then. 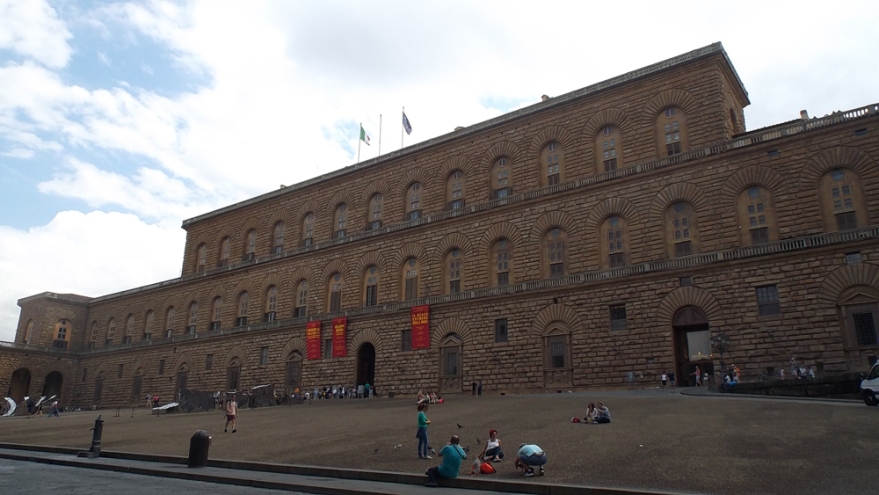 Instead we found the Pitti Palace and lunch in a cafe opposite. I made a mistake in that cafe, ordering something with meat. I was quite upset that I’d mixed a word up, but they kindly changed it for what I’d intended to order. That’ll teach me not to think I’m too clever! 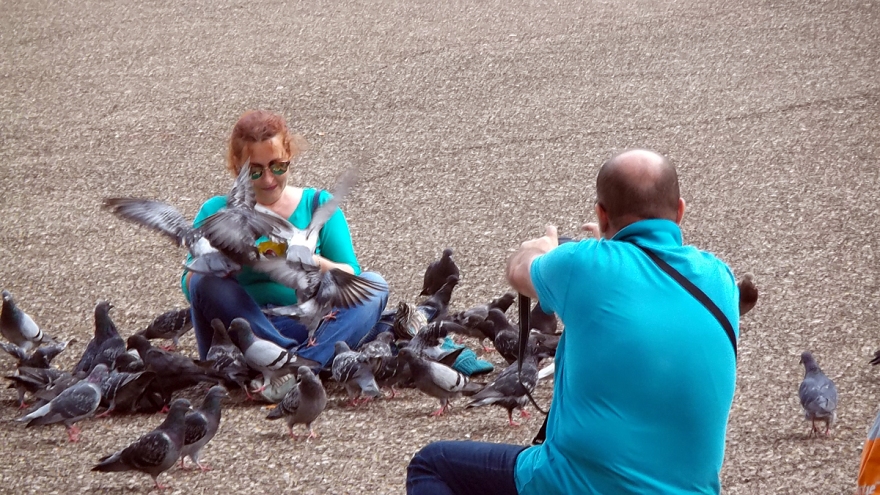 We had a gelato and watched the world go by after lunch, 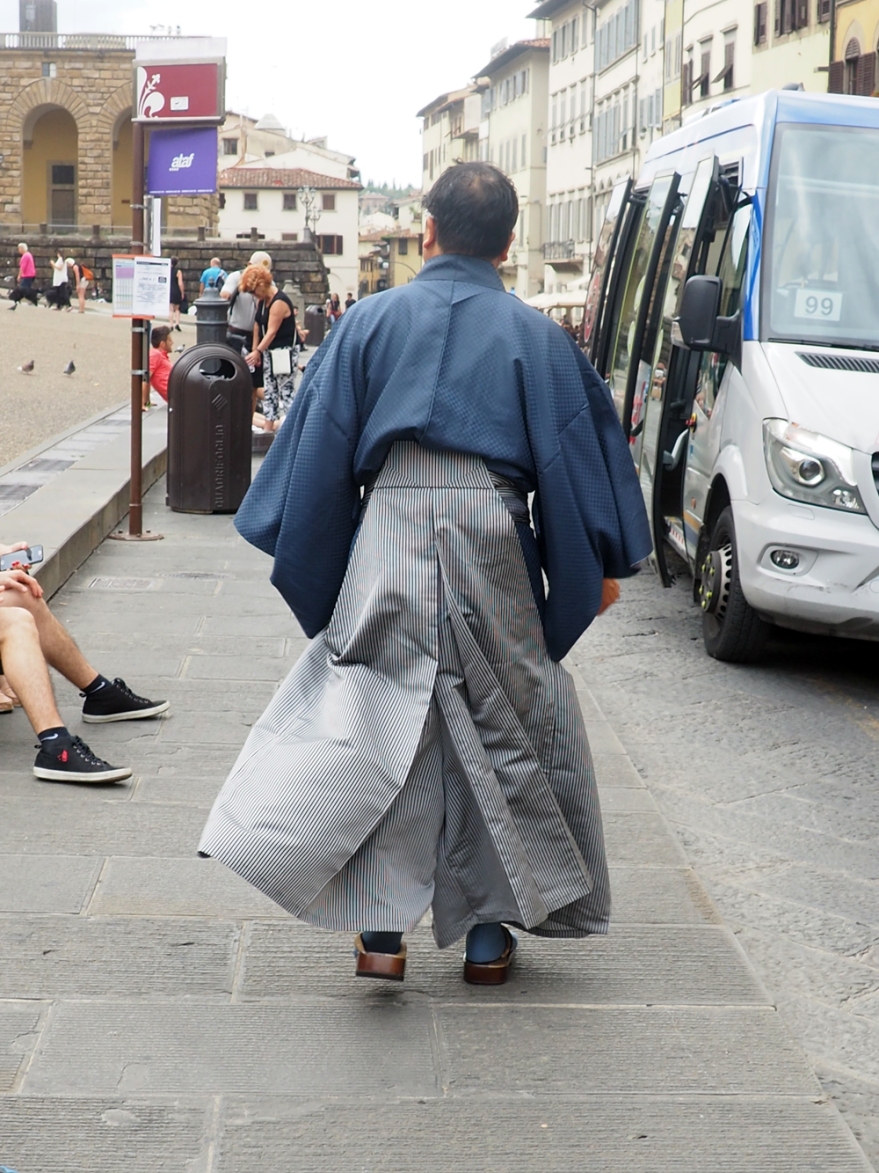 and of course I loved this sculpture. 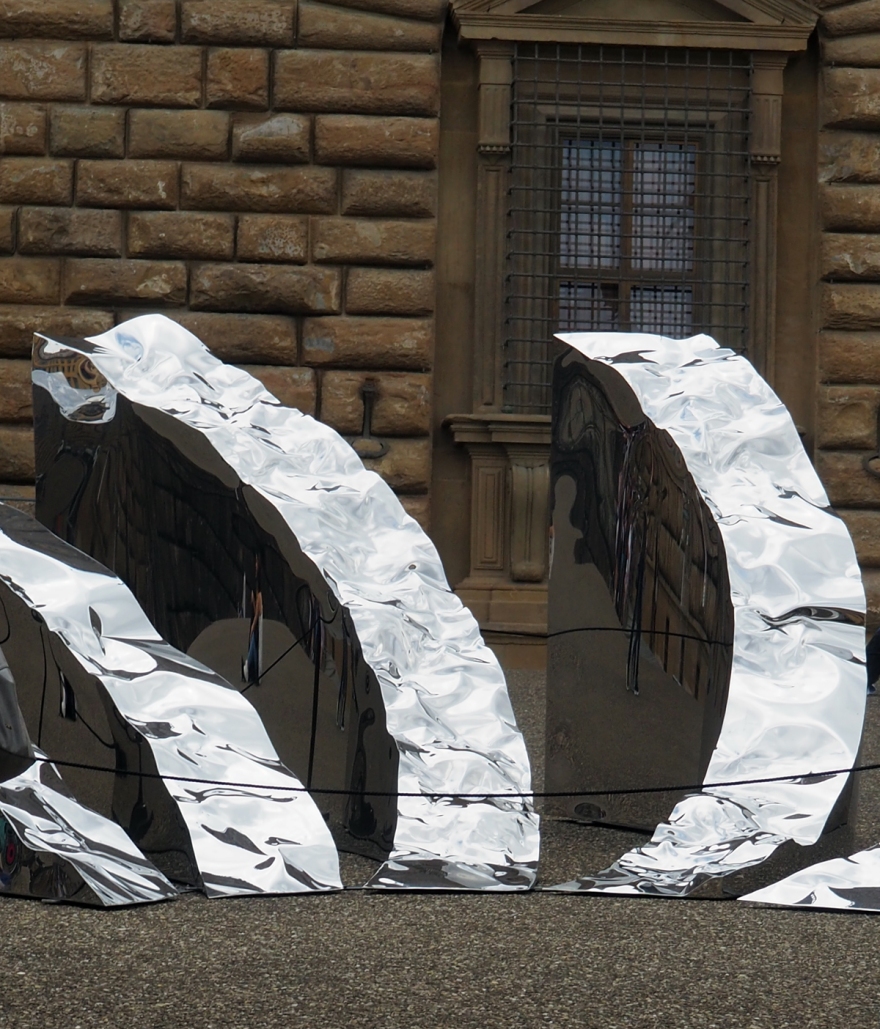 We ended this walk, which I’m sharing with Jo, who knows it well, at Ponte Vecchio. 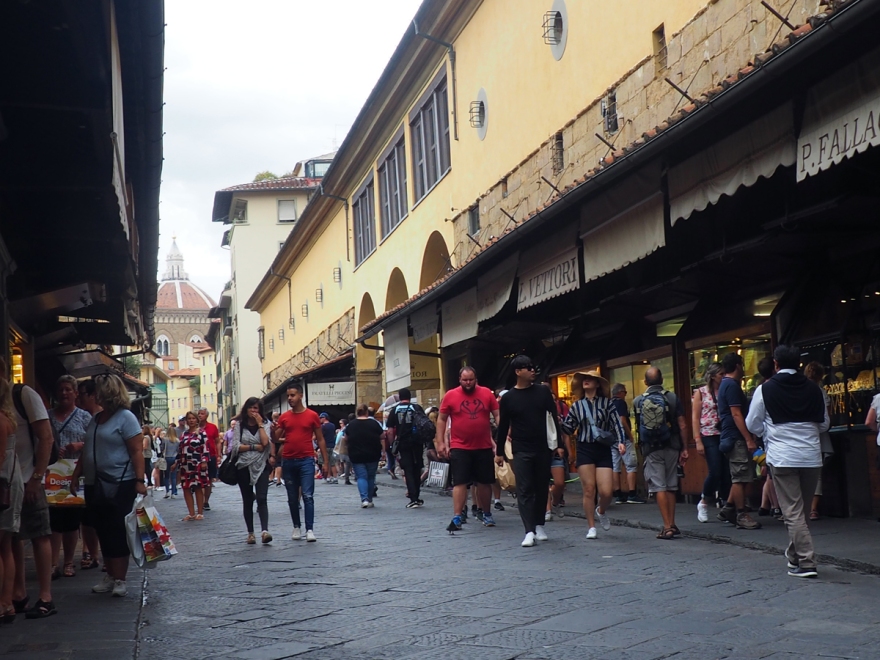 I wonder where she’s walking this week.