Amy’s in the hot seat with this weeks challenge with the theme of Everyday moments, and she’s following in Monet’s footsteps in the Dutch countryside. It looks pretty wonderful too.

I’m closer to home, my local park, where on summer days people in their whites gather to play bowls. I can remember seeing them when I was at infant school, I always wanted to run across the impossibly smooth and green lawn.

Heavitree park was created in 1906, I suspect the slow, graceful game has been played there since the beginning.

I’ve been watching this fungi in the park for a couple of weeks, wondering what it is. It’s growing on an oak tree that was planted in 1911, to mark the coronation of George V and Queen Mary. The tree has had an interesting time of it, in the summer of 2009, it cracked down through its middle. Tree surgeons were able to rescue it, by reducing the crown, they say it will last another hundred years. 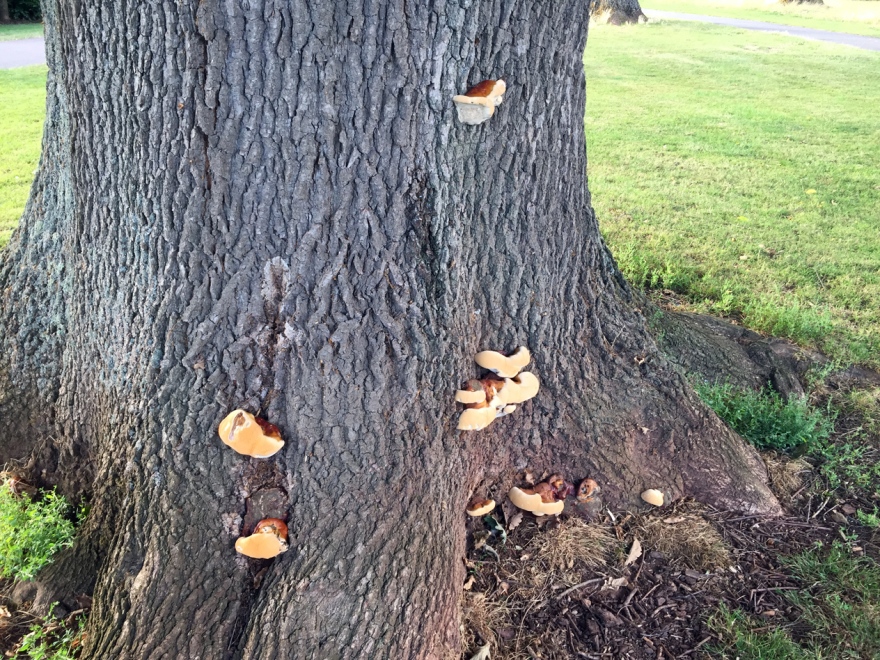 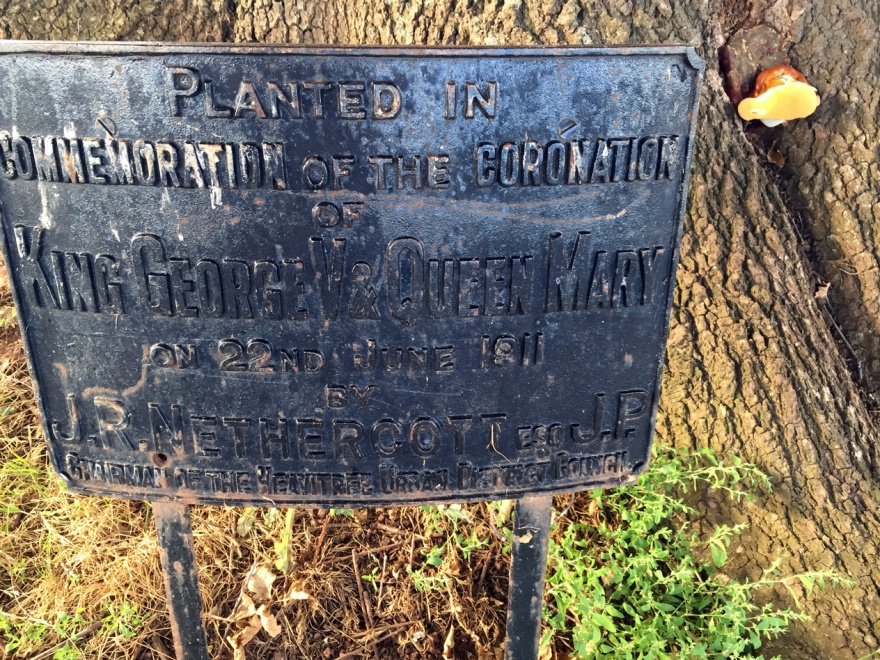 When I saw the fungus, I though it looked like a batch of currant buns! From what I discovered, it seems I was on the right lines. 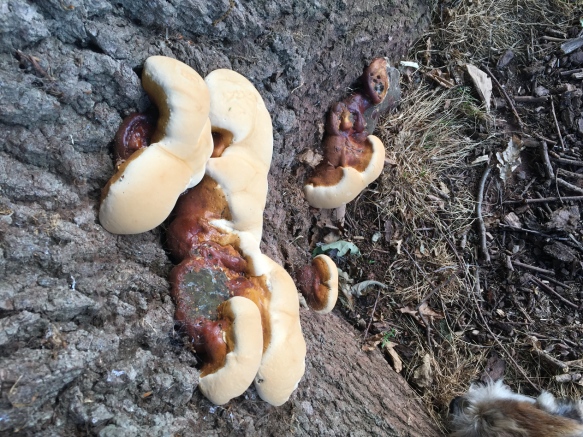 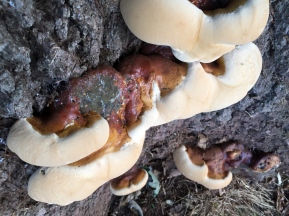 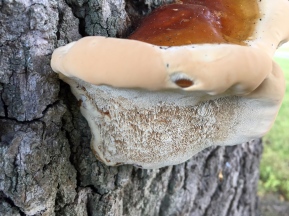 I think they are a kind of bracket fungus, with Bread Roll Fungus for it’s common name. Unless you know any different?

In October 1987, Michael Fish a now infamous BBC weather presenter, told the UK not to worry, there wouldn’t be a hurricane, but there would be some strong winds further south in France and Spain. In the event, winds of up to 115mph caused £1 billion of damage and 15 lives were lost.
In my city, many trees came down including a number in Heavitree Park. When I was five years old, my daily walk to and from school took me through the park and I remember those huge, majestic trees standing guard over the gentle sloping landscape gardens. Each September I’d collect conkers from under the horse chestnuts and watch the squirrels collecting nuts for their winter larders. You can imagine how upset I was all those years later when I walked Jassy, my golden retriever through the park, a few days after the hurricane that wasn’t going to happen. 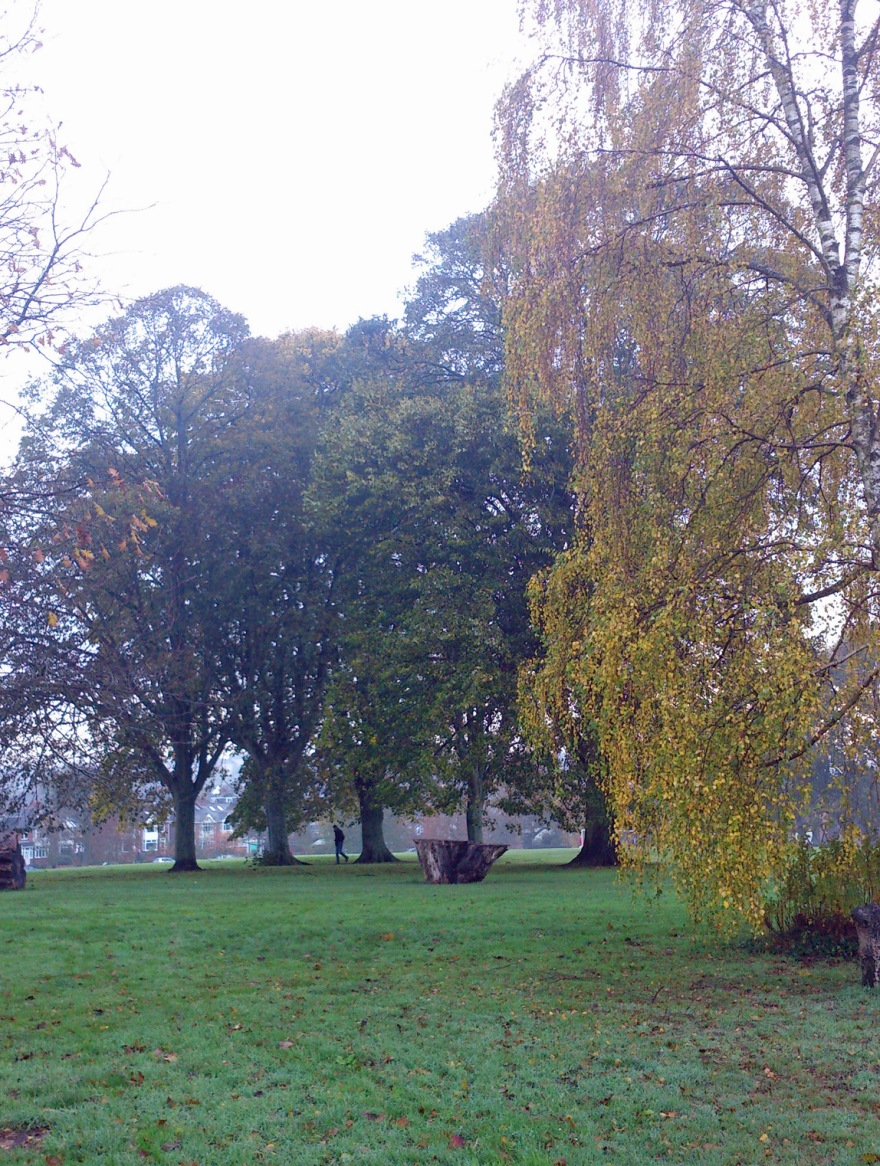 If you look closely you can see the stump of one of the old trees, see how big it was? 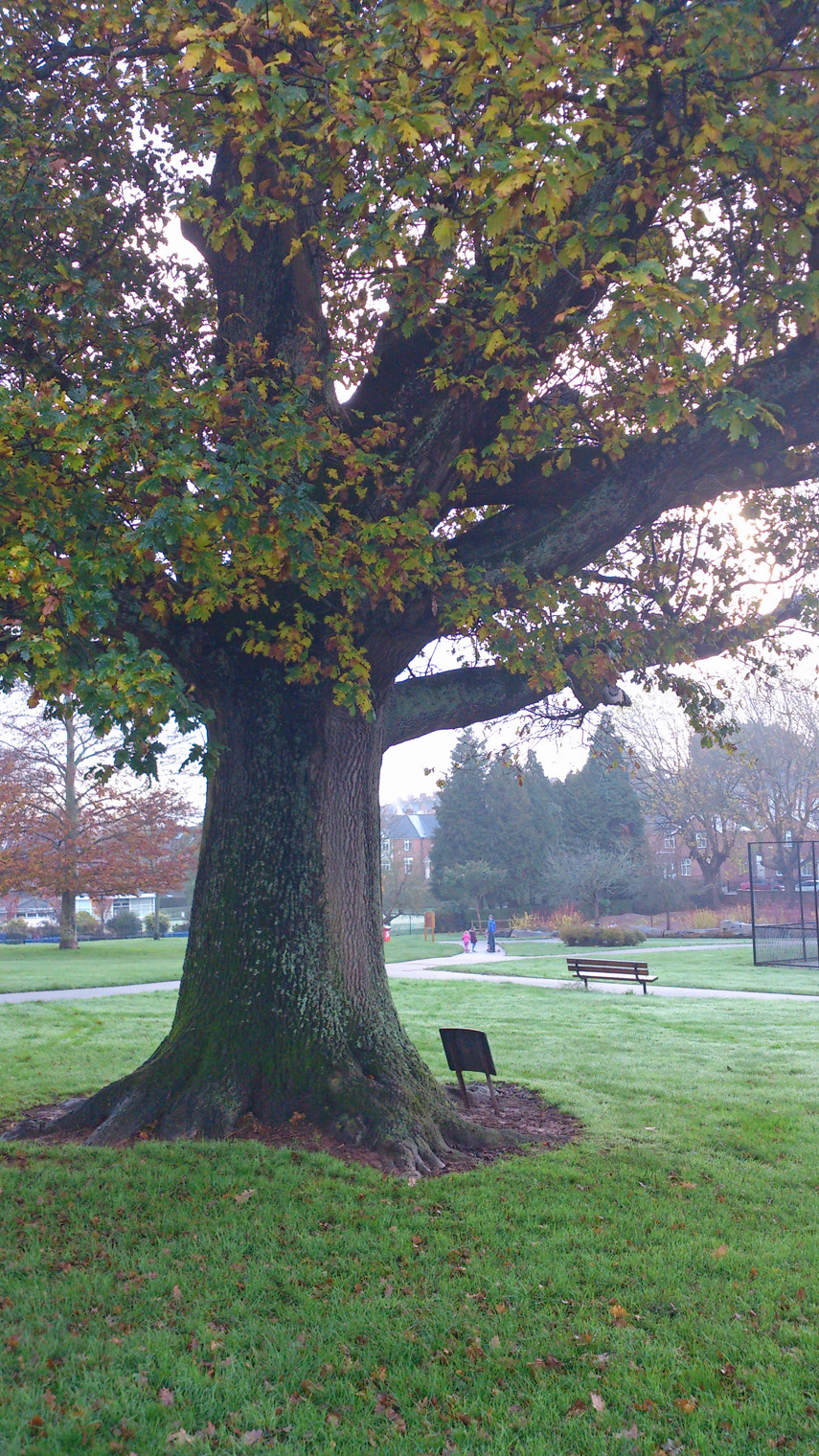 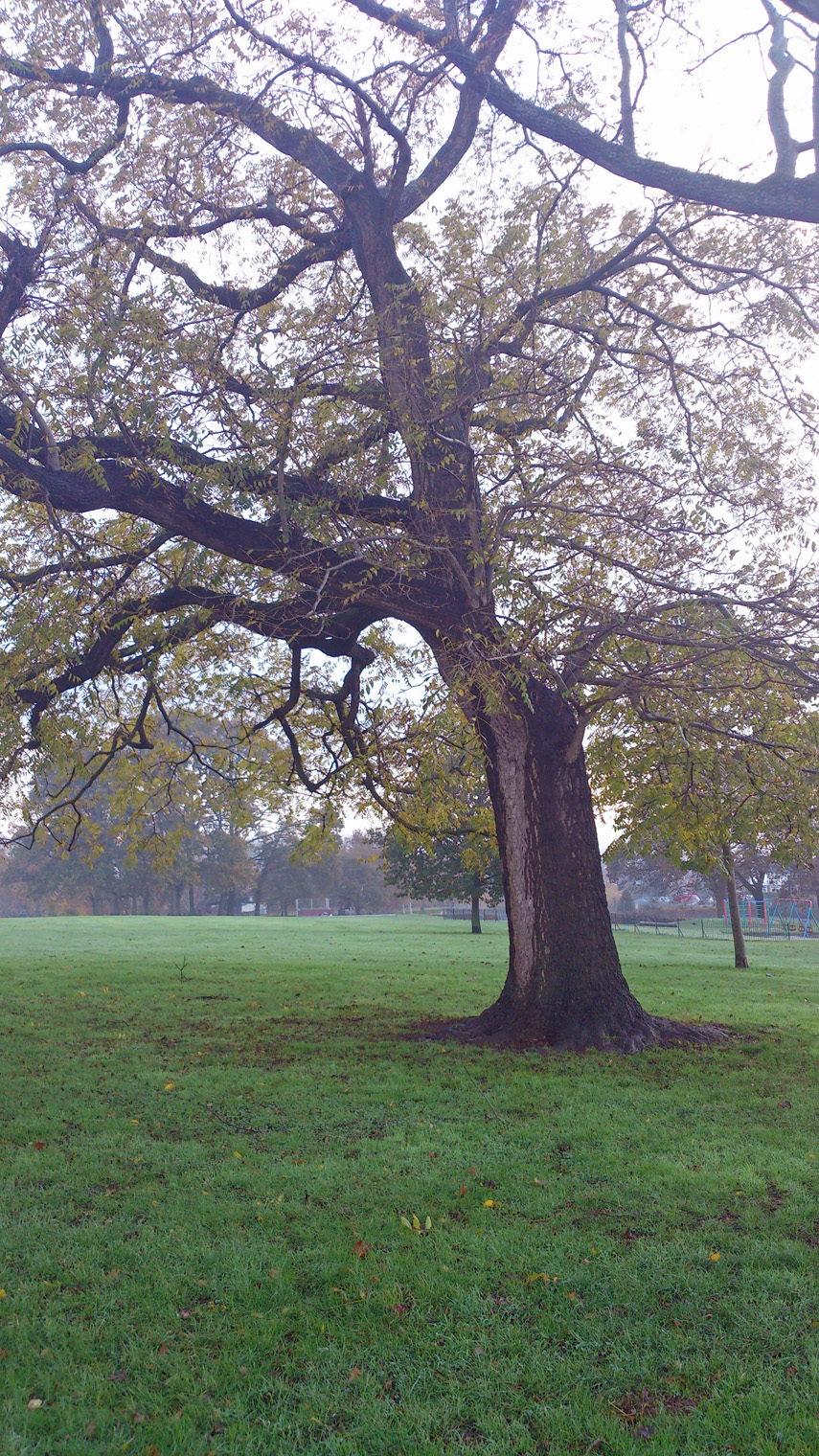 The park has never been quite the same for me, but I can walk there without tears now. Thankfully, a few of the old trees, including these above, survived that dreadful night.
A couple of years later the council planted a small grove of birch, carefully fenced off to protect them at first. They have now grown to maturity and are a lovely sight. So yesterday I walked Dido and Daisy, the border terriers early in the morning, before the November fog had cleared. They chased the squirrels – futilely of course, and I only had my phone camera but I had to share the young trees with you. 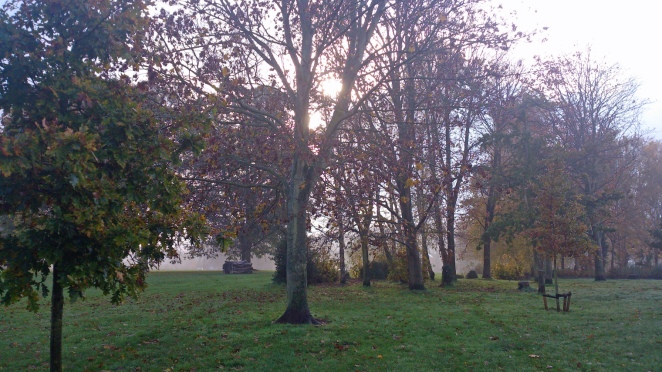 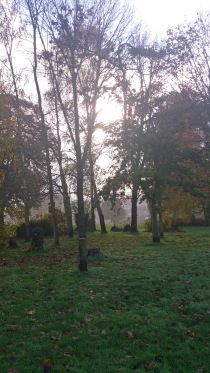 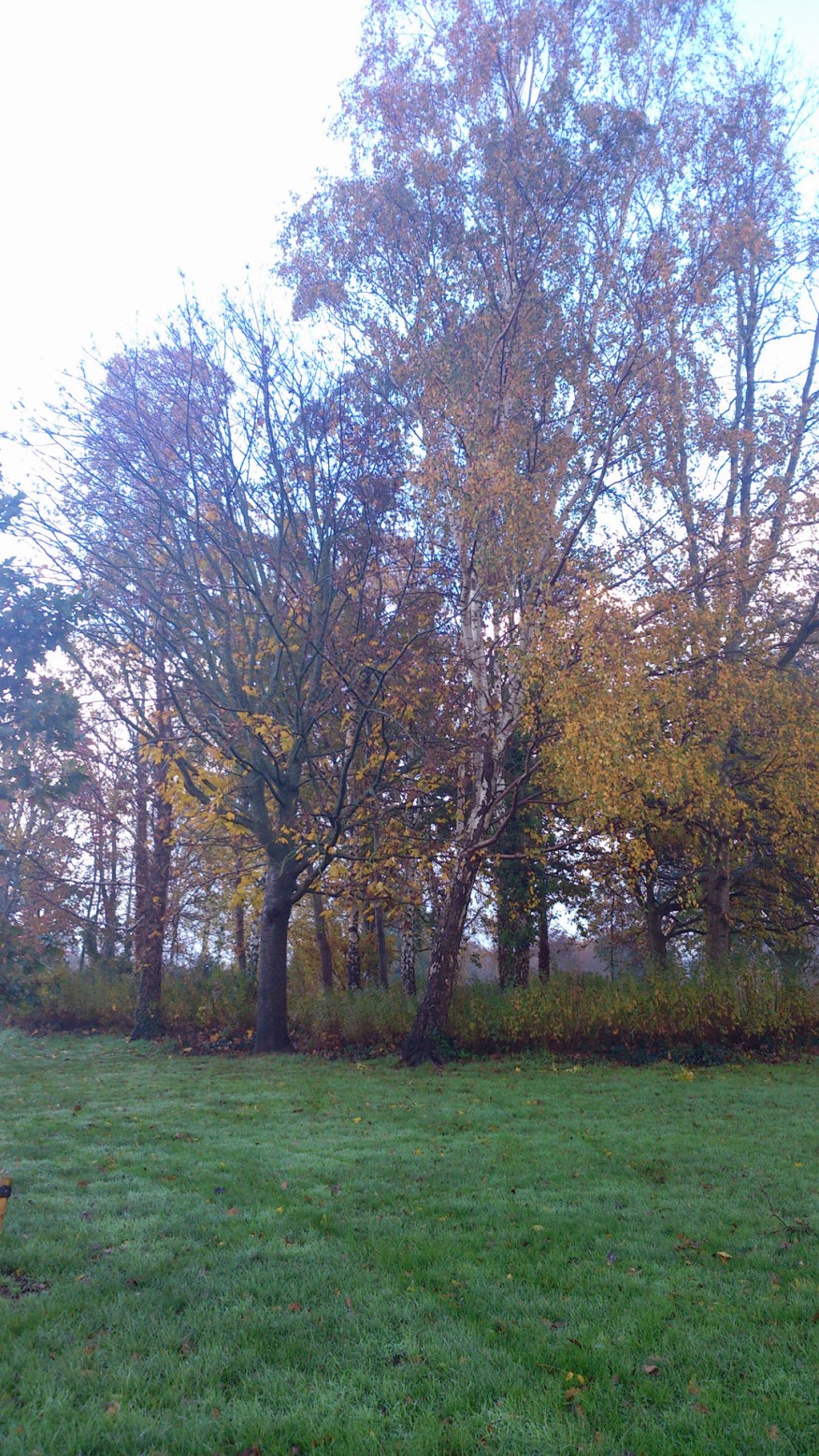 I hope they never have to stand up to a hurricane.