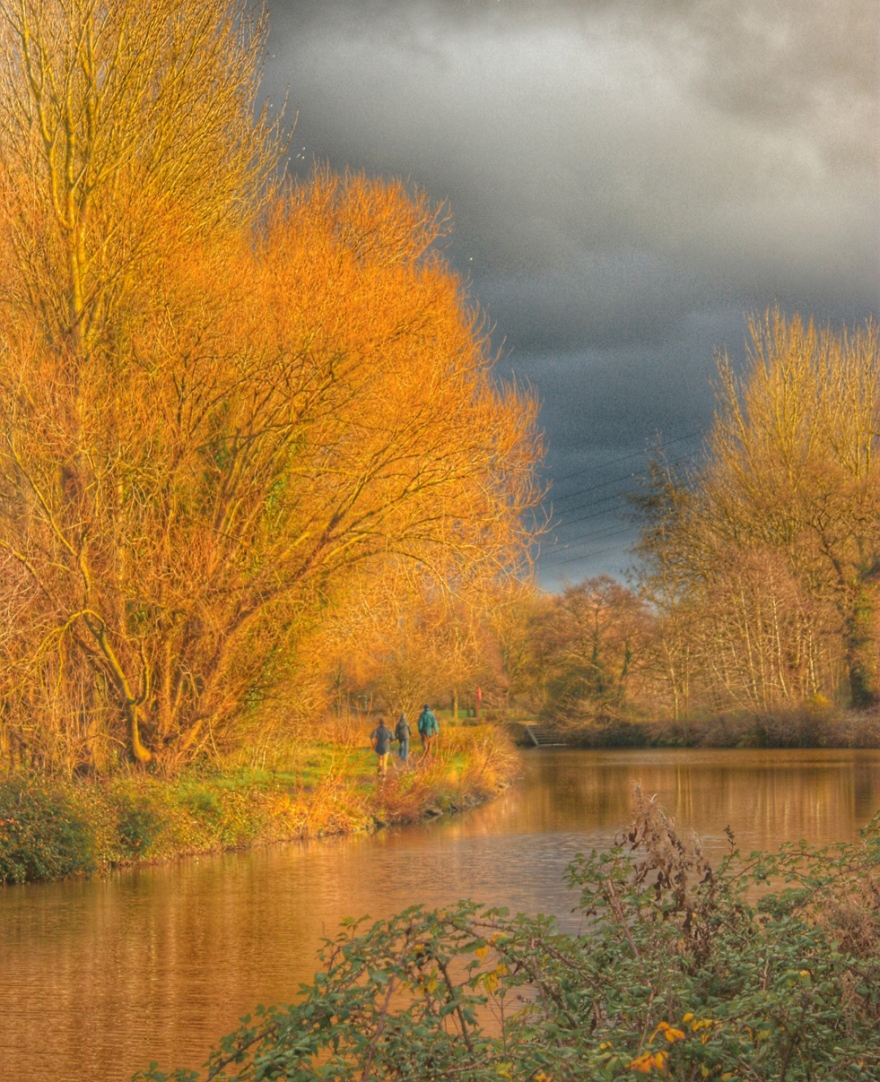 for walking a fresh pathway

For this week’s challenge, take a moment to notice your now, and share a photo of it. Perhaps it is something imperfect, or mundane, or under-appreciated. Maybe it is a simple moment, or maybe it is something grand; we can’t wait to see!

I went for a walk under a grey sky yesterday and had just driven off towards home, when I spotted something that told me when now was. I though it was quite a good fit for Jen’s challenge at the Daily Post.

I case you can’t make it out, the clock commemorates Queen Victoria’s 60th Jubilee in 1897. Then I scrolled through my reader and came across this post from Bossymama, showing a much more sophisticated version, what a coincidence!

Jithin at Photrablogger has a weekly challenge, Mundane Monday, but the photos are anything but mundane. It’s about seeing beauty in the everyday.

I think that Jude is doing one last bench series post, a swansong before she begins her garden photography challenge for 2016. December’s theme is ‘anything you like’, so I’m posting these photos from July that didn’t quite fit before. 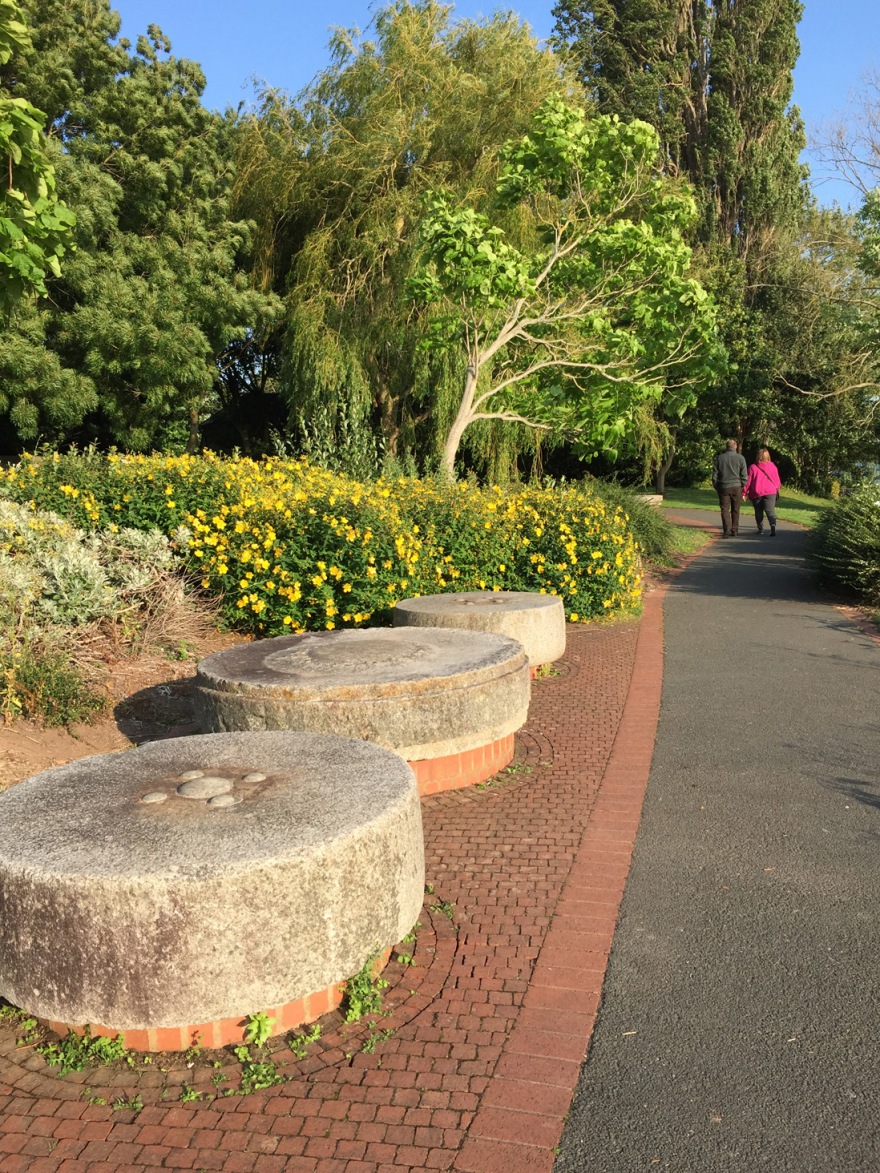 The area around Trews weir on the Exe has a rich industrial history, with cotton, wool and paper mills back in the sixteenth century. I haven’t been able to find out if these millstones are actually original or reproductions but they are perfectly positioned where a mill once operated.

If you’d like to join in pingback to Mundane Monday Challenge.

It was no good, the clouds would not lift today, so I either had to wallow at home with chocolate or go for some fresh but grey air. The fresh air won and the chocolate wasn’t going anywhere 😉 so a stroll in theTaddiforde Valley that runs along the university campus was the choice.

The campus is very quiet out of term and being Boxing Day the car parks were empty. We headed out from the lowest entrance, just off Prince of Wales road. 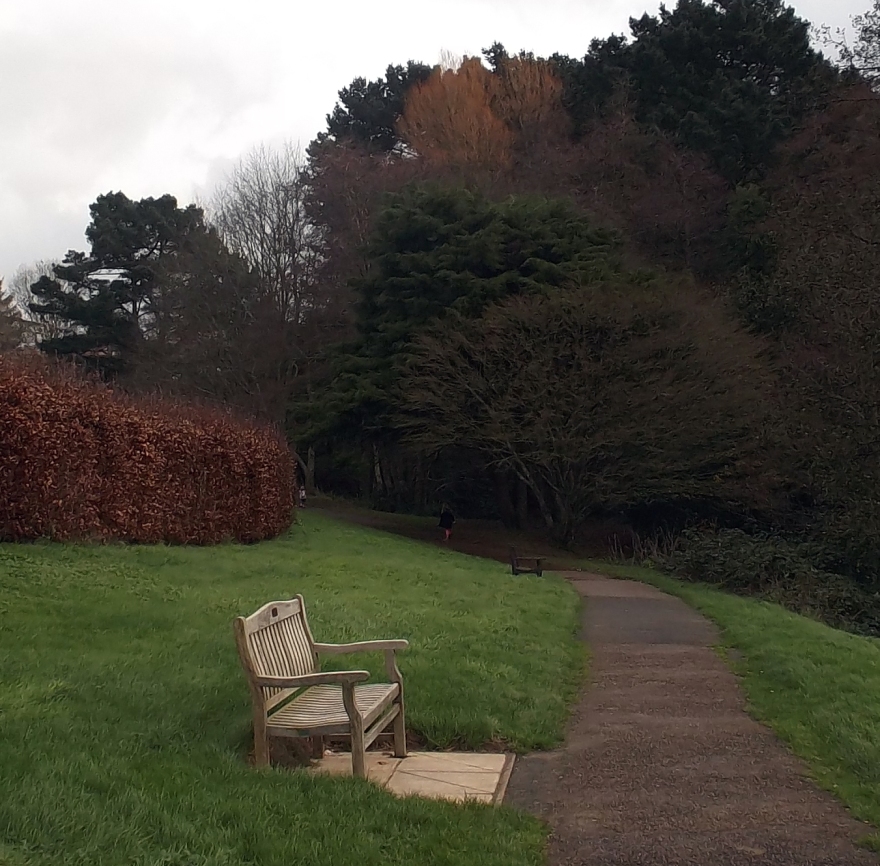 It’s a popular spot with local walkers, and in summer the odd student has been spotted relaxing on the grass. 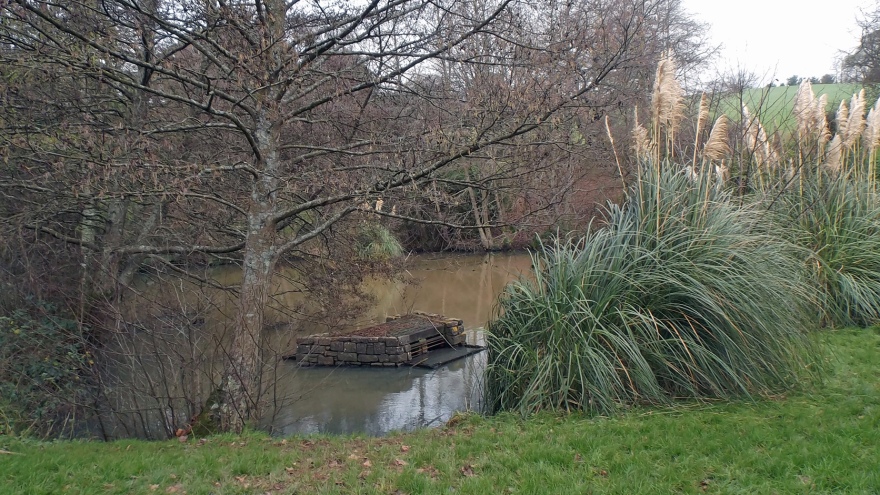 Water is present throughout this short walk, the ponds through the valley were created in the 60’s and 70’s to look like natural watercourses, the ponds being fed from the Taddiforde  Brook. There are several varieties of water bird, but they heard Dido and Daisy coming and made themselves scarce.

The Gunnera have given up for this year, but usually this late in the year they would have totally died back.

We walk past a small stand of Silver Birch. 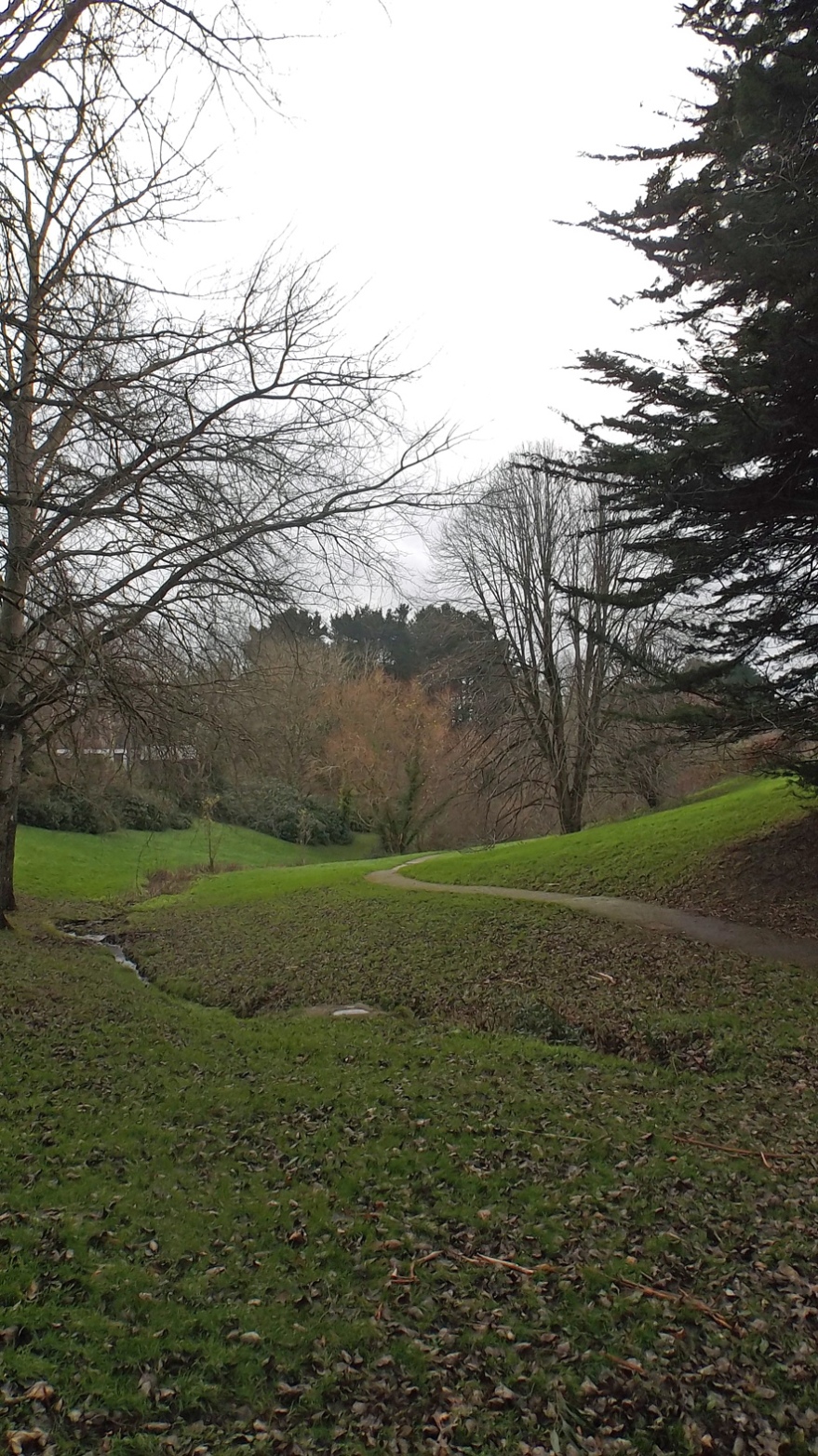 The path meanders gently upwards, it’s a place for slowing down and being mindful.

Sometimes the water rushes down in narrow gaps and sometimes it stagnates. In spring this area will be alive with tadpoles, frogs, toads and newts. The area is managed well to provide habitats for wildlife.

The girls would like to know who lives there.

We’ll cross this little bridge in a moment, 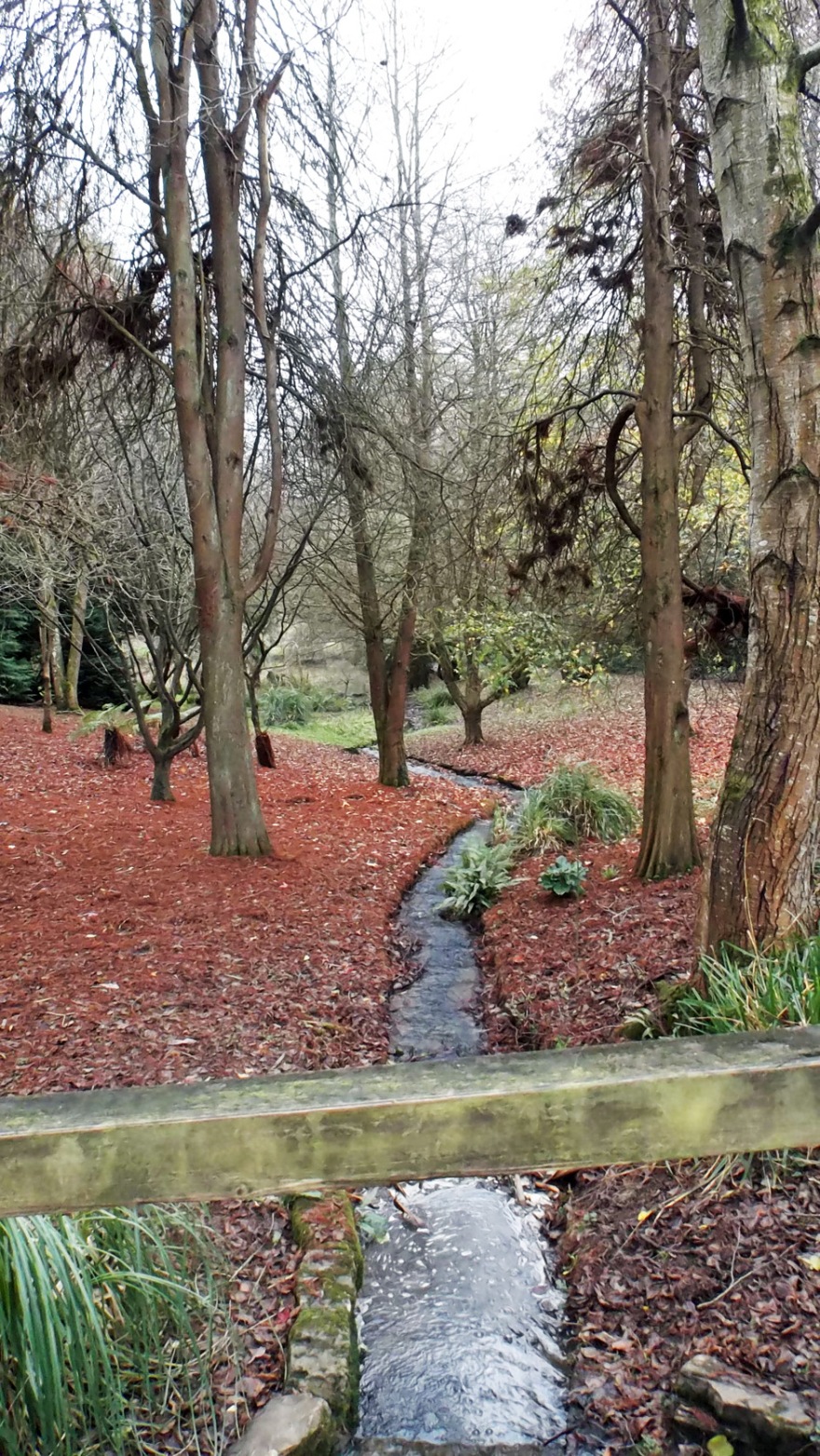 and look back the way we came.

Grand eucalyptus with leaves draping and bark shedding in harmony. Do you see the tree fern in the background? 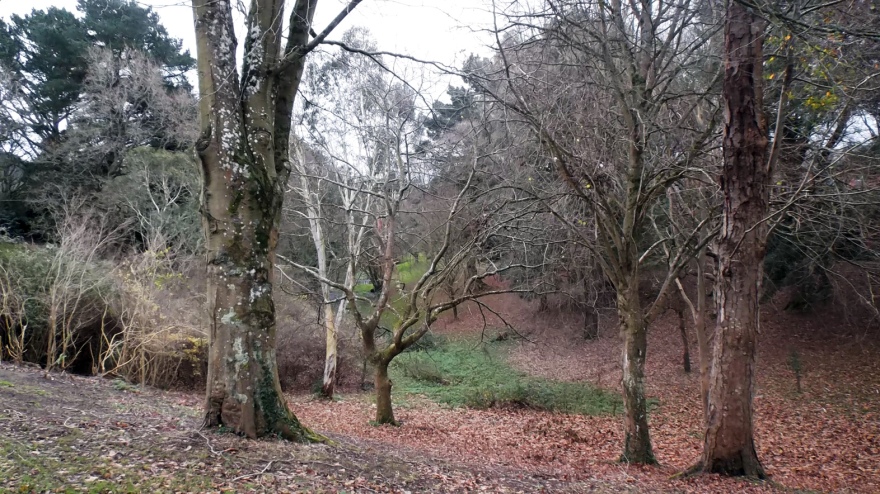 The path swoops around, with lots of places for inquisitive dogs to disappear.

The benches are a bit functional, but there are plenty and adequate for dog waiting!

It looks a bit murky, hope they didn’t jump in.

I don’t know if this is a blue hydrangea losing it’s colour very slowly or a variety that I’ve never seen, but it was a subtle beauty.

We’re going back down towards the first pond now, the wind is gusting quite loudly in the trees, and judging by the bird activity, they’re battening down the hatches in preparation for a storm.

Exeter University is one of the top ten in the country, attracting students from all over the world.The campus and the valley is an arboretum and botanical garden, of some 300 acres, and described by the Independent as ‘sublime’.  There are around 21,000 students in a city with a population of just 125,000, sometimes it feels as if they are taking over. They are certainly contributing to housing shortages, especially affordable ones, and an increase in multiple occupancy properties that are landlord owned. I hope the students appreciate their surroundings and I’d like to see more local people enjoying the grounds. It’s a place where the woods and countryside meets the city, and part of Exeter Green Circle.

I’m sharing my Boxing Day walk with Jo, last Monday she was walking the Algarve hills, I wonder where she’ll be this week.

When the stars glow bright

with light in the Christmas sky

rest in peace and joy

Share with us your interpretation of “gathering.” It could be your entire family decked out in ugly holiday sweaters. It could be a group of seagulls strutting down the beach. Perhaps it’s a basket of fresh herbs you’ve collected from your garden for that awesome pasta dish this evening.

So Krista at the Daily Post says, and it’s worth popping over to see her dogs, they are so cute!

spotted on the harbour wall at Lyme Regis. I was really hoping they didn’t look up !