I so wish I could walk in the New Forest with these two angels one more time, but last week my beloved Dido did a hop, skip and jump across that rainbow bridge to join her sister Daisy. I can’t believe that it happened so quickly, it hurts so very much.

I thought this was going to be the first day that I managed not to cry, but of course as I write, I’m sobbing again.

We miss them so much, but life must go on, perhaps soon some other fur babies will arrive. Not to replace them, that would be impossible, but to bring their own special love into our lives.

Posted on May 6, 2017May 6, 2017 Posted in border terriersTagged Border Terriers, Grief, Loss20 Comments

April this year was one of the saddest months ever, so I haven’t been around here very much. It began with the death of my youngest sister, Daberechi, in Lagos. She was very young, and I can’t believe that I’ll never see her again.

The month ended with the loss of Daisy, one of our border terriers, Dido’s litter sister. She hadn’t been herself for a few weeks, showing signs of age, she was nearly thirteen. But when she went off her food, Steven, the vet investigated further and blood tests revealed that her liver was seriously damaged. We had to make the decision to let her go. So last Saturday, she danced over the rainbow bridge, as we stroked her, and told her we love her.

Dido is pining for her sister, they were never apart. She saw her die, but who knows what she understands. She seems to be waiting for her to come home.

Each time we lose someone, whether it’s a person or a precious pet who’s been a member of the family, all the other losses we’ve experienced come rushing back. I’m crying over the sorrows of now and of the past, but at the same time finding joy in little things.

Here’s sweet Daisy, a few years ago. This week my daughter told me that Scarlett who is four was picking Daisies for Daisy. How will we explain to her when she visits in a few weeks?

Right now Dido is at my feet, keen to go for a walk, so we’re off out, so she can find some joy in the park today.

Yesterday I admired Jo’s lovely beach photos and commented that I haven’t been to the beach for ages. Then, after lunch the sun came out, there was a perfect blue sky for a while, it just had to be grabbed, Exmouth called. We were there in twenty minutes,

The only problem was, 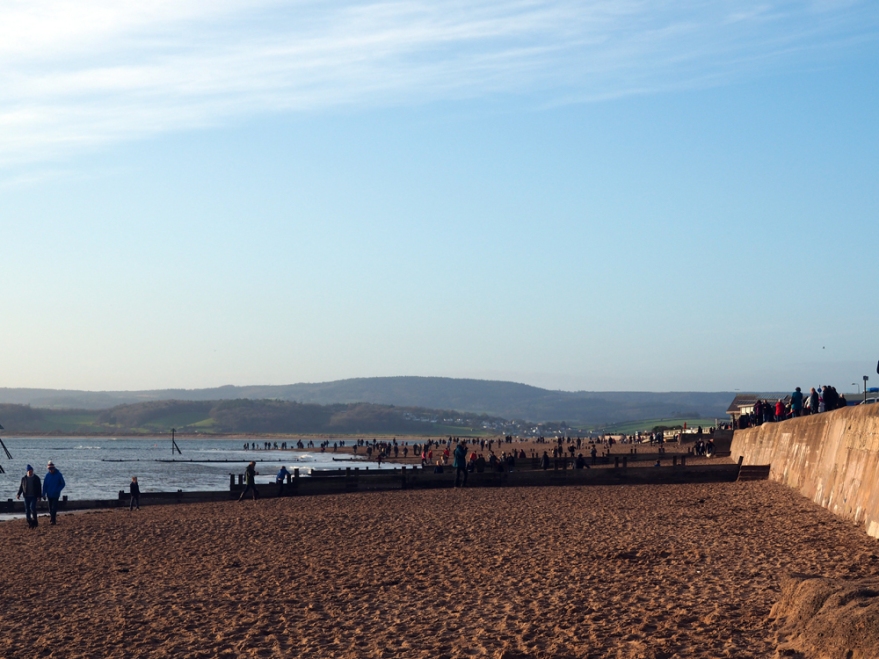 like an army of ants, everyone else was there as well! 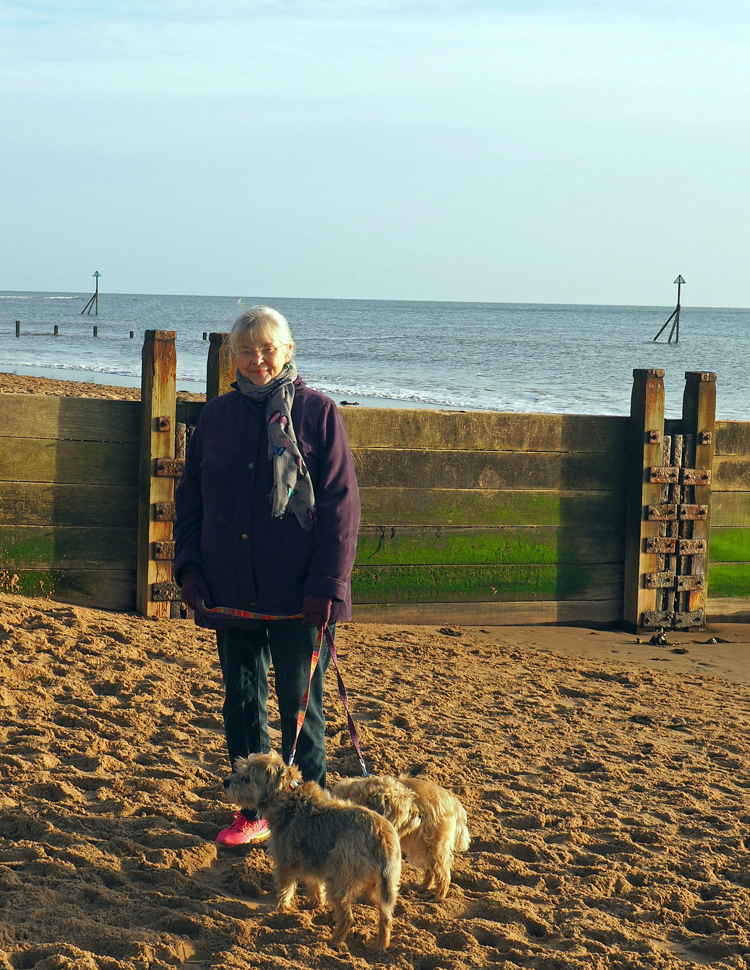 But Lindy and the dogs just chilled.

The dogs and I got wet feet, and fun was had by all.

Last call, as Rommel would say.

Daisy’s first walk for a week!

Poor little Daisy has had a bad back, so she hasn’t been allowed out, or up and down steps. She’s happiest when she’s sniffing around, disappearing in the undergrowth in the woods, or dancing around the park, so she’s been feeling sorry for herself. I think she’s come out in sympathy with Jo!

I really like Cheri Lucas Rowlands theme for this weeks photo challenge, and I hope that Daisy makes you smile.

If you want to join in, the theme is ‘Face’, and can be interpreted any way you choose. Pop over to the Daily Post and see what other people come up with.

Krista at the Daily Post has chosen the them of Afloat for this weeks photo challenge. I wanted to avoid the obvious, much as I love boats, so this is what I came up with.
First of all, on the beach last weekend Dido came close to being afloat and certainly looks as if she is!

I think she was surprised at the speed of the waves coming in.
Maybe Scarlett is using her toy box as a boat, who knows what goes on in the mind of a toddler. 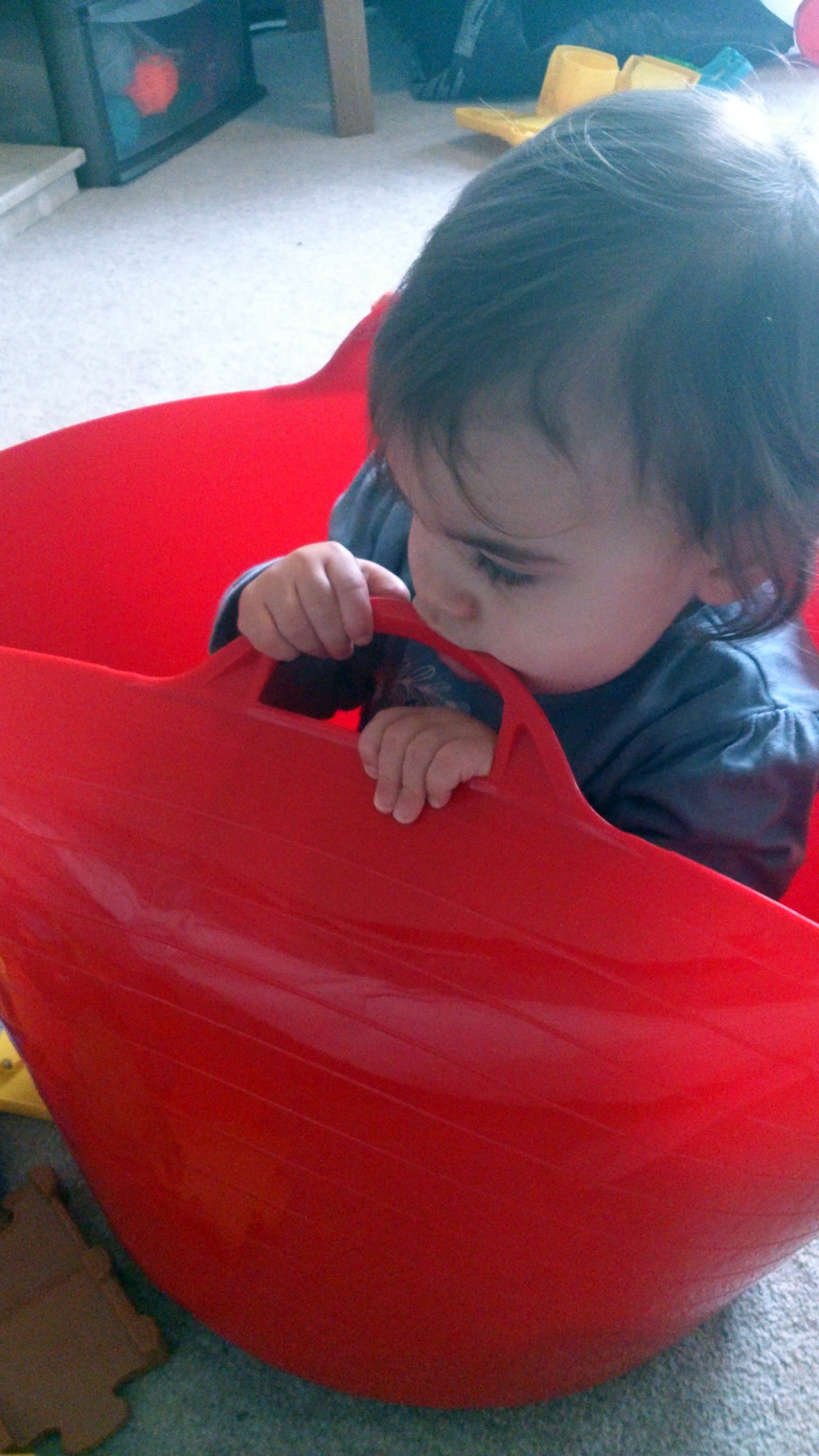 And lastly, I took this photo of a local pub many years ago. At the time I used photoshop 7 and played with the Omni effect on this photo. I’ve always thought it makes the pub look like it’s floating in the canal.

Do you agree?
If you would like to join in visit the daily post to see lots of entries.

Little Daisy Border Terrorist has been slowly growing a skin tag on her eyelid, just under her eyelashes. It started as a little dot not doing much, but then seemed to turn grow to about 7mm almost overnight, so it had to go. The vet said that it would be no problem, just a little discomfort for a few days. She came home, head surrounded with a Buster Collar, very sleepy but still hungry. She had her eyelid shaved and it was quite swollen. Usually Daisy and her sister Dido like to groom each other several times a day so the collar helps prevent that, as well as protecting her from getting anything in her eye. She hates it! She tries to scratch or roll it off and she can’t judge how much space it takes up.  Going up and down steps is a challenge and scrambling through the dog flap into the garden is impossible. 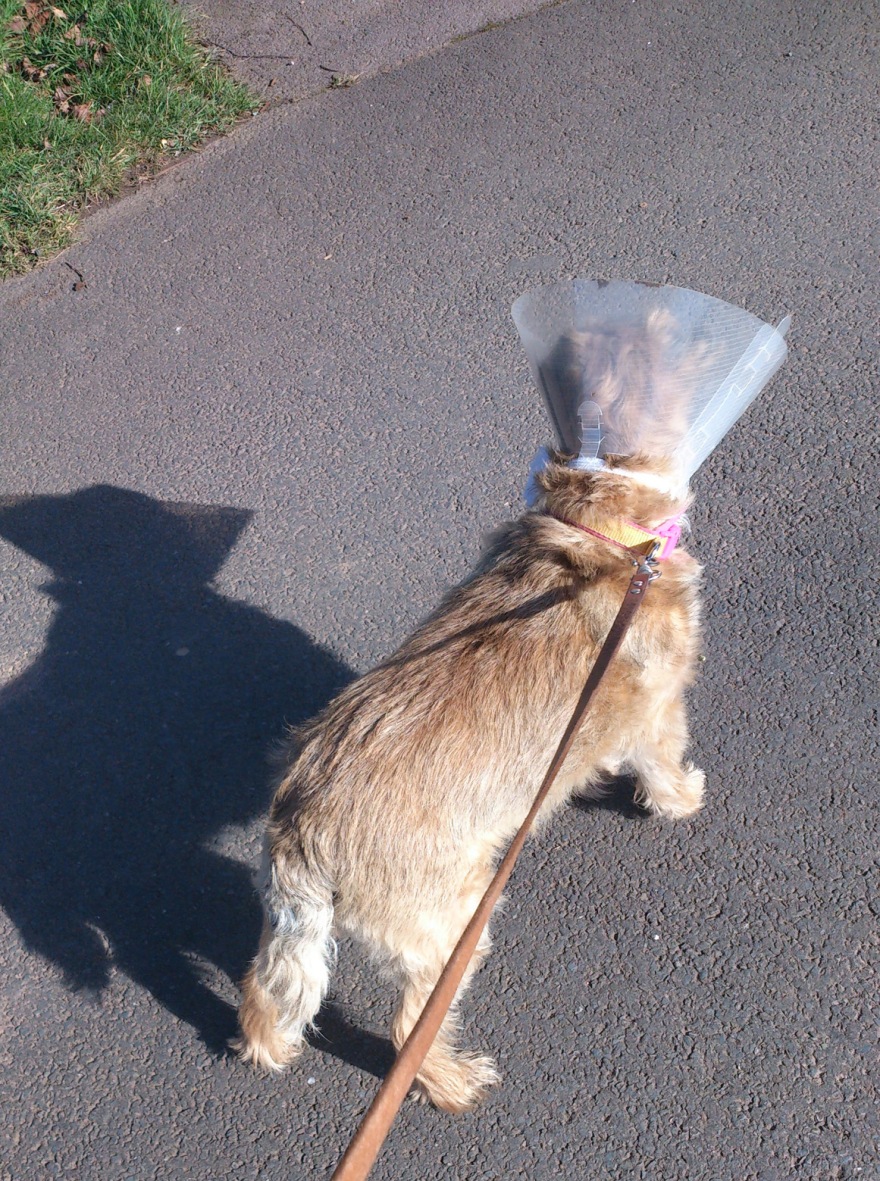 Today we went to the cemetery, a nice stroll for me, with spring blossom around every corner. 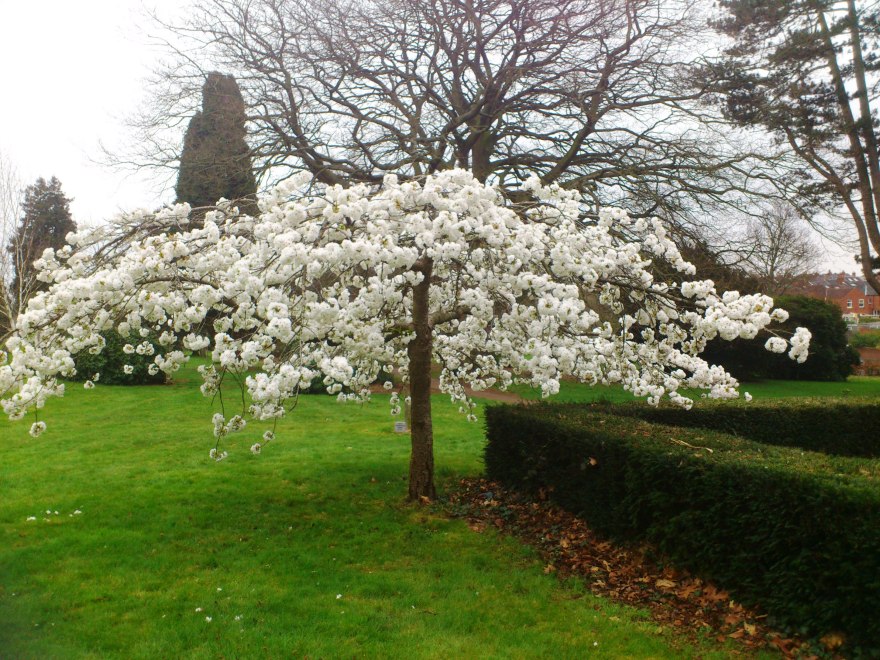 Daisy didn’t feel the same at all, she wasn’t able to do her doggy stuff. Border terriers like nothing more than chasing through the woods and undergrowth, scrabbling in hedges, after some real or imaginary prey – rabbits, mice and rats. They loathe squirrels and the cemetery is full of them, I’ve seen Daisy climb six foot up a tree trunk in an attempt to catch one.

Here she is looking sorry for herself. She has perked up a bit through the day, so she’s on the mend, bless her and Dido has resisted ‘cleaning’ her wounds!

Jude at https://smallbluegreenwords.wordpress.com/bench-series/ is running a monthly challenge with the theme of benches this year and January’s topic is ‘In the Garden. I’ve already posted one photo but I came across this one today and as it made me smile maybe you will too. 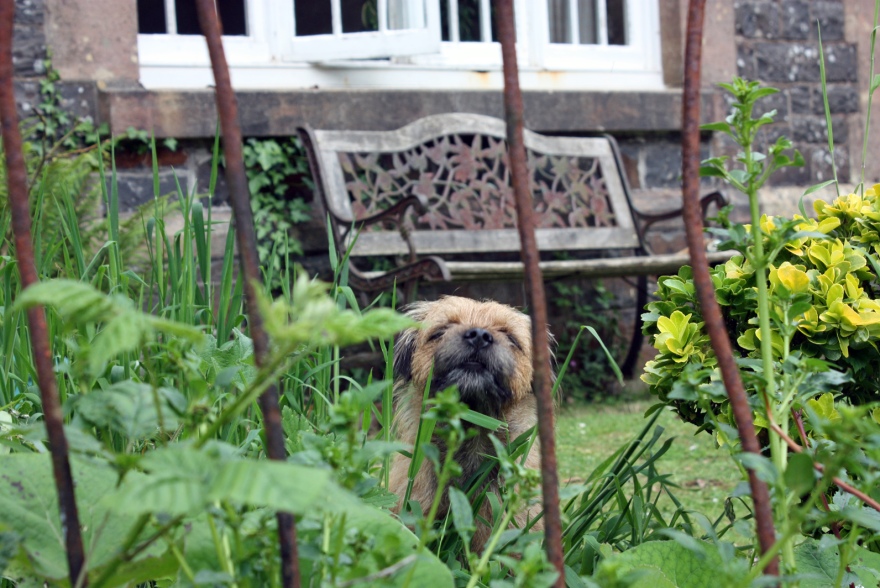 This is Daisy, I don’t remember what she was laughing at, but this is a typical Daisy expression and it comes with a happy ‘grrrhhh’ and a lot of tail wagging. She was probably enjoying the fresh air at Hartland Abbey garden in north Devon. Or maybe she wanted me to sit on the bench so she could have a rest too! 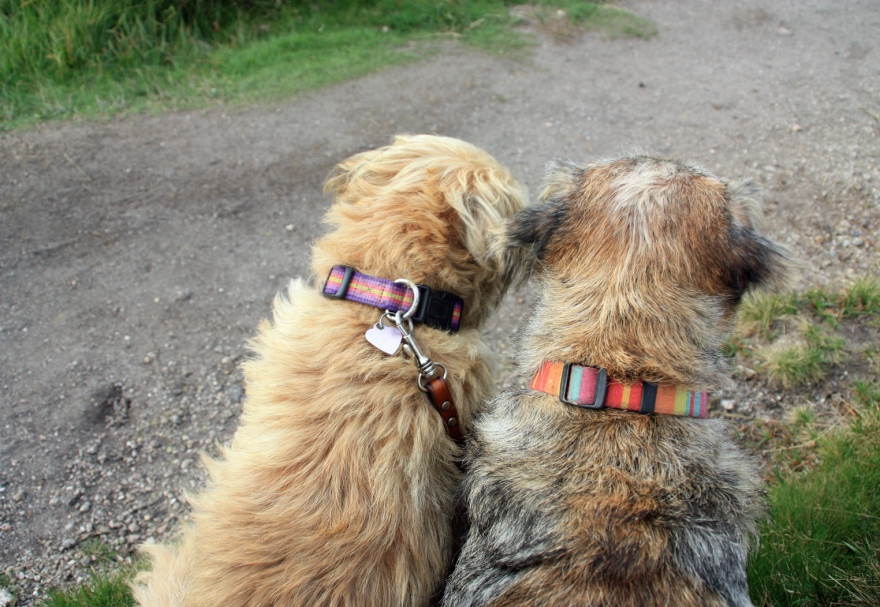 Dreaming of a swim

chasing ducks in the canal