After a walk at Hive beach we arrived at West Bay around four o’clock on a winter afternoon, and drove around hoping for tea and cake.  We parked and dashed to a café we’d spotted, just as they turned the sign to closed. I asked the staff member if there was another café nearby and she grunted that we could try across the road. Thank goodness they were closing, because ‘across the road’ was perfect.

She had directed us to Sladers Yard, a historic rope warehouse from the early nineteenth century, that supplied rope to the whole of the British Navy. Since 2006 it has been a café, and judging by the lemon polenta cake, the food is excellent. Here is the main café area. 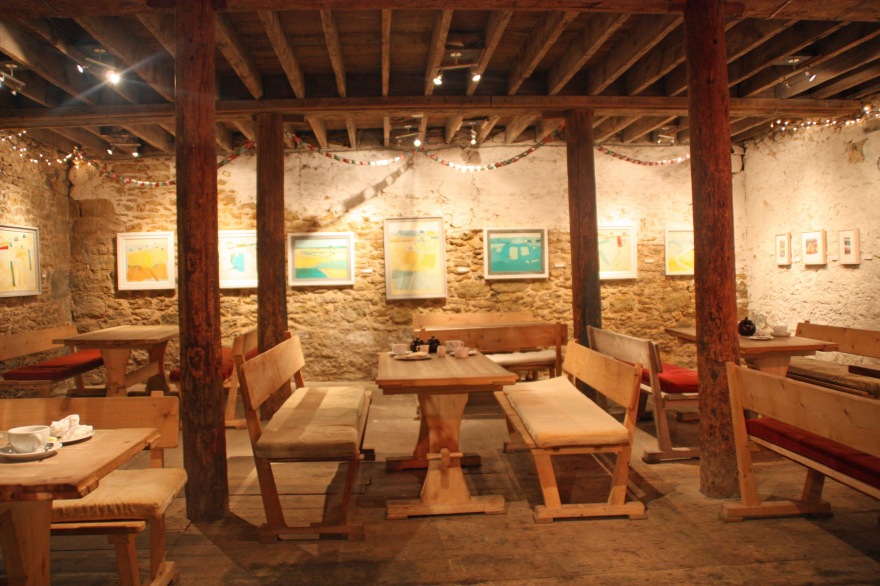 There is a further multi purpose space,  and the building is used as a party and wedding venue and for poetry and musical performance. Notice the building?

It is beautifully done, with a perfect balance of restoration and  rawness, and as a contemporary gallery it is a stunning backdrop for the art displayed. 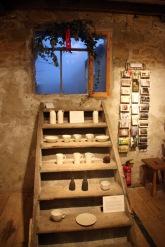 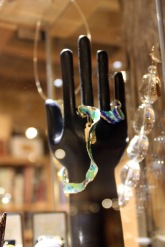 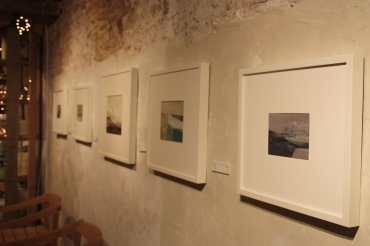 Sladers is run by Petter Southall a furniture designer craftsman, and his wife Anna Powell. Petter’s work is the stuff of dreams, the kind of wood that makes you want to stroke it and inhale the fragrance. 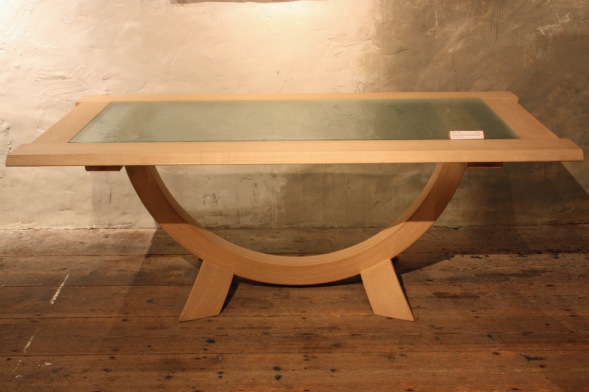 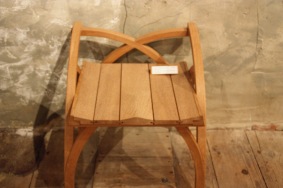 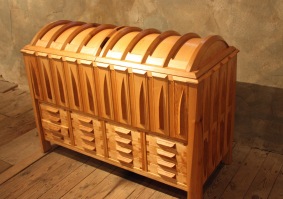 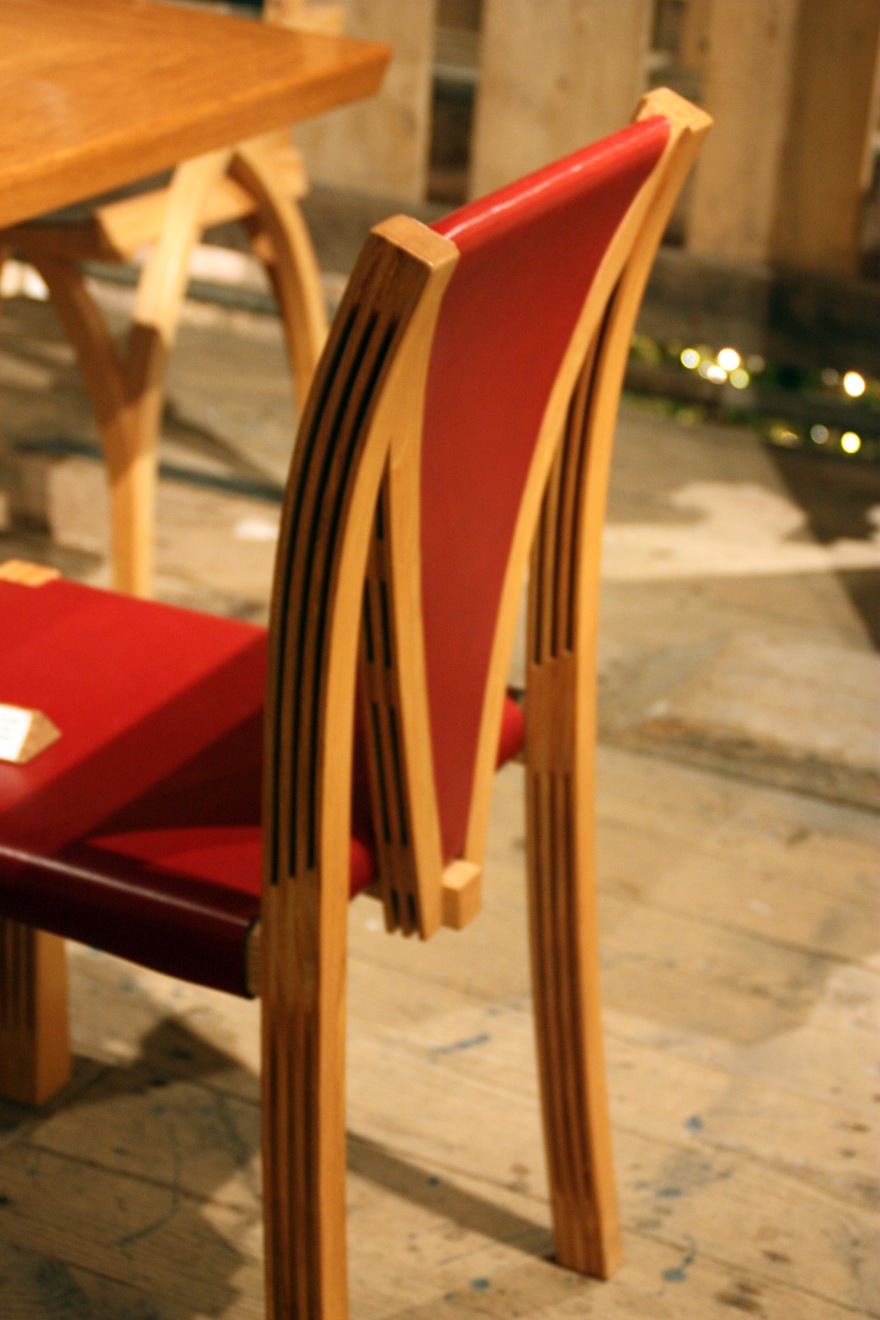 Goodbye Sladers, I’ll be back in summer with enough time for lunch, outside in the yard. 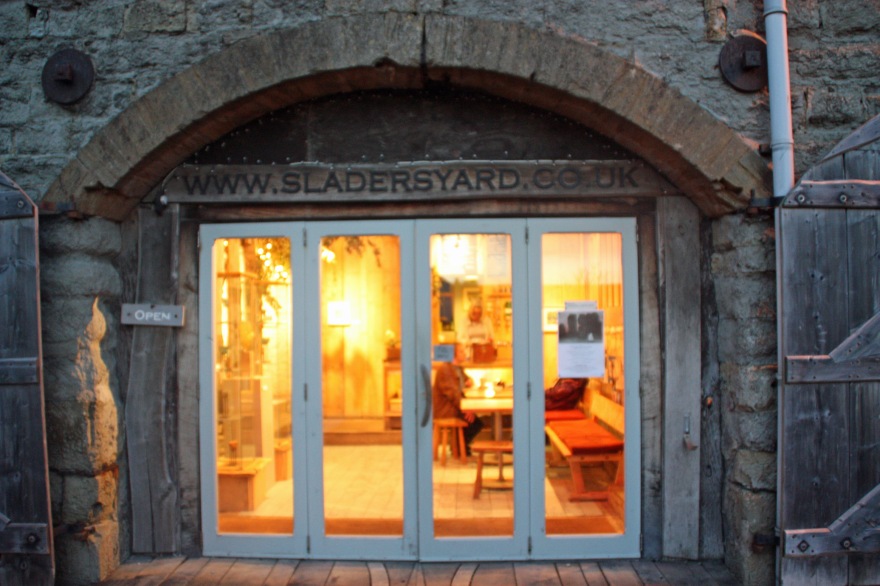 Checking for the date of the building, I came across . . .

https://sladersyard.wordpress.com/  where you will find photos that are much better than mine, do have a peep.

Friday was the most perfect winter day here and I had an extra day off, so it couldn’t be wasted! My friend and I set off heading east with a vague idea of perhaps Lyme Regis or Charmouth. Leaving the A30 at Honiton and taking the A35, a winding, up hill and down dale road passing through little villages, Wilmington, Kilmington and Raymonds Hill. Enjoying the view, high and wide, of east Devon and west Dorset, Golden Cap, a hill and cliff which is the highest on the south coast of England, waiting for me to climb one day.

Something took on us past the Charmouth and Lyme turning, towards Burton Bradstock, ten miles further and passing through we stopped instead at Hive beach which has a National Trust car park and access to the South West Coast Path. Hive is a noisy beach, not human noise but nature’s noise, as the waves crash onto the shore and then rush back down the steeply shelved shingle.

There were quote a few people walking off the seasons excesses on the beach so we thought we would check out the view from the cliff path.

We climbed quite high and Lyme Bay opened up.

At the highest point we looked north towards Bridport.

In the distance stands Colmer Hill, somewhere else I’d like to visit.

Then we circled around common land on the side of the hill.

And retraced our steps.

We had already sampled the Hive Beach Café’s coffee, so we set off to find tea and cake, tomorrow I’ll show you where!

We only had time for a short walk because the daylight was fading fast, but the area deserves some serious hiking, there is so much to see in West Dorset.

Ooops I scheduled this, obviously when I was too tired to know what day it was!

Do you have towns that you regularly drive by and just don’t get round to stopping? I have several, and on Saturday I did get round to this one! Bridport, in Dorset (my second favourite county) is just 40 miles from home. I bypass it nearly every month on the drive to see my daughter, often wondering what it’s like. This time I got to visit because my friend and I had a table at a craft fair there, for the first time.
Bridport is known for its thriving arts and hosts the prestigious Bridport Prize for writing each year, I’d like to be good and brave enough to enter one day. The craft fair took place in the Arts Centre, where Dee, the manager fell for my hand made cards, thanks Dee 🙂
Saturday is market day and this particular one was also the annual carnival, so the little town was positively bursting at the seams, buzzing and vibrant, with tourists mingling with locals and market traders.
I love markets and dashed around like a headless chicken, wanting to buy, see as much as possible and soak up the atmosphere. All the time I was aware that my friend was on her own and possibly busy while I went walkabout, snapping away with my phone camera and wishing I had my big girls Canon. Never mind, here are some of the things I saw. 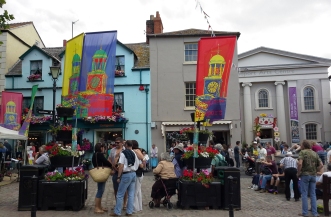 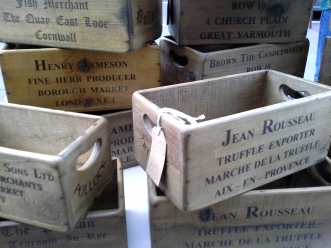 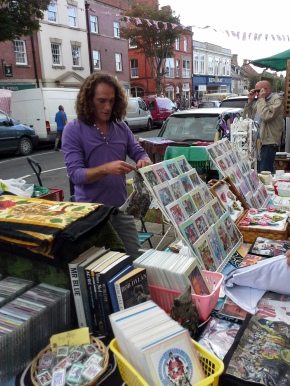 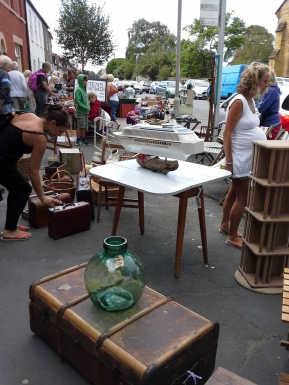 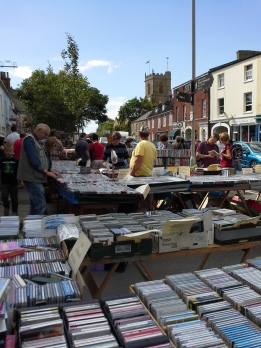 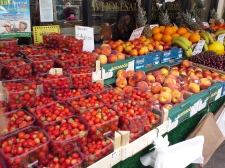 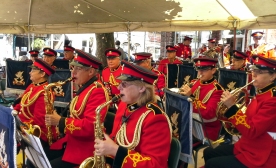 I managed to resist buying anything! The book stall was most tempting – of course, but I’ve forbidden myself from buying any more until I’ve reduced my unread pile. And stuff? well I mustn’t take anything home unless I’m prepared to take something to the charity shop. What I did get though was bread, glorious locally made with green olives, sun dried tomatoes and cheese and the most heavenly texture. I wish I’d bought more. I won’t be bypassing Bridport on a Saturday again.
Hope you enjoyed my visit!

‘In the Background: The places that we pass through day after day, or even once in a lifetime, leave in their small way, echoes and traces of themselves upon us. But so often when taking self portraits or pictures of friends, the places themselves become a soft blurred mush of indistinct semi-nothingness, the limelight stolen by our smiling faces. In today’s challenge, let’s turn the tables. Take a picture of yourself or someone else as a shadow, a reflection, or a lesser part of a scene, making the background, or — as in the example above — the foreground, the center of attention.’
Of course I don’t get it! But here goes anyway. Join in with the challenge at http://dailypost.wordpress.com/2013/05/24/weekly-photo-challenge-in-the-background/

I’ve chosen three beaches for Ailsa’s theme, all of them beaches in the south west of England.

I’ve just realsed that yo ucan’t actually see the beach, but I promise it is there!

Saturday was beautiful and we drove through Torbay, stopping near Thatcher’s Rock to gaze at this view of Lyme Bay. The phone camera doesn’t do landscapes well but gives you the feel at least. Stretching across the sea are some of the little places I’ve taken you, my favourites, Exmouth, Budleaigh Salterton, Sidmouth, Lyme Regis and Charmouth.

It was difficult to photograph these windows without standing in the middle of a busy road, so I had to be content with an awkward angle shot. Never mind they’re bright and cheerful!

Sandra usually creates Thursday’s windows but I think she’s still busy with Christmas so Sharon has also gone ahead and posted hers.

Cee you didn’t say it had to be straight lines so I’ve pushed the boundary slightly! 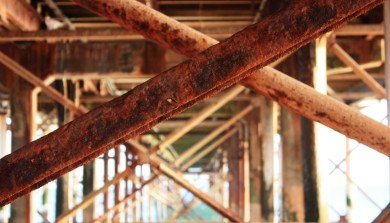 Whenever I see this crazy sport I’m compelled to watch but I hold my breathe. One slip could be disastrous, they are so fearless, I don’t remember ever feeling this invincible in my youth! It’s the first time I’ve seen it in daylight but I still only had my phone camera. Have you ever tried this? or any extreme sport? I would love to see your photos if so.