If you’ve visited Lucid Gypsy a few times you’ll know that I don’t do science, but if I ever decided to, it would be geology. The ground we walk on really fascinates me, especially around here. On Saturday my friend and I went to Axmouth (and saw yesterday’s robin) and walked on the pebble beach for a while.
Just a small area, but a part of both the East Devon Area of  Outstanding Natural Beauty and the Jurassic Coast World Heritage Site, this 304 hectares has been named  Haven Cliffs.

I’m not posting this first photo for its beauty but so that you can see the change in the rock, at Beer, a couple of miles west of where I stood, from white chalk to red sandstone.

Back to the cliff above me, click to see the layers.

And again. See how the landslips have made the  layers visible? 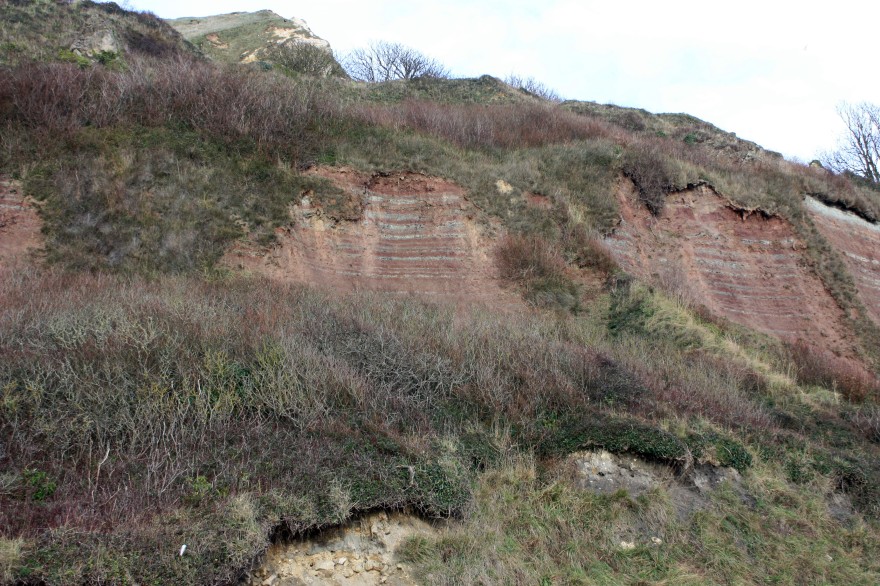 The South West Coast Path rises above these cliffs and it’s possible to walk the 7 miles east to Lyme Regis. It would be a killer though unless you’re really fit, in which case it would take  5 hours. The time and distance is fine but I don’t do hills very well. I’d like to take a boat trip along the Jurassic Coast, and see it from that perspective, perhaps this summer.

Yesterday as I walked beside the Axe estuary, I heard a little flutter in the cliff beside me. I turned just as robin landed.

My heart sang with joy as he sang to me. 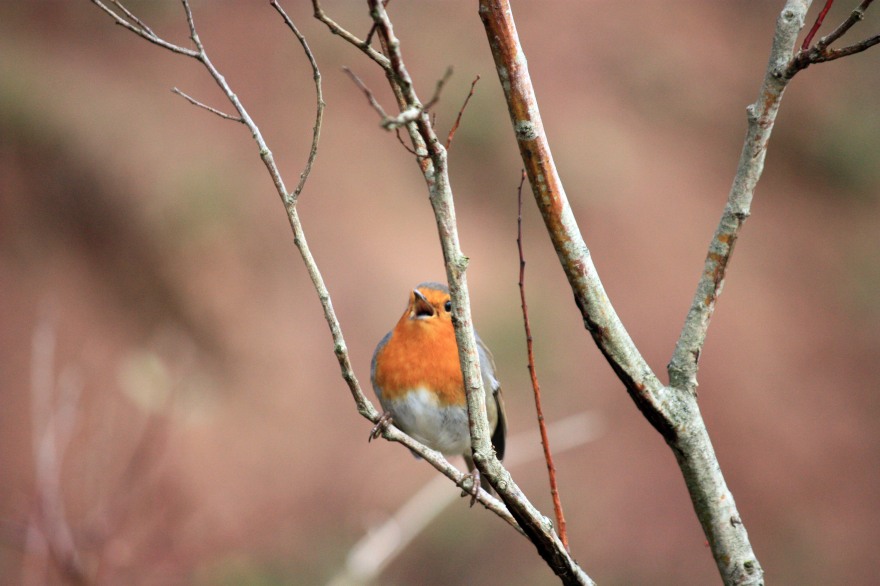 I got a little closer. 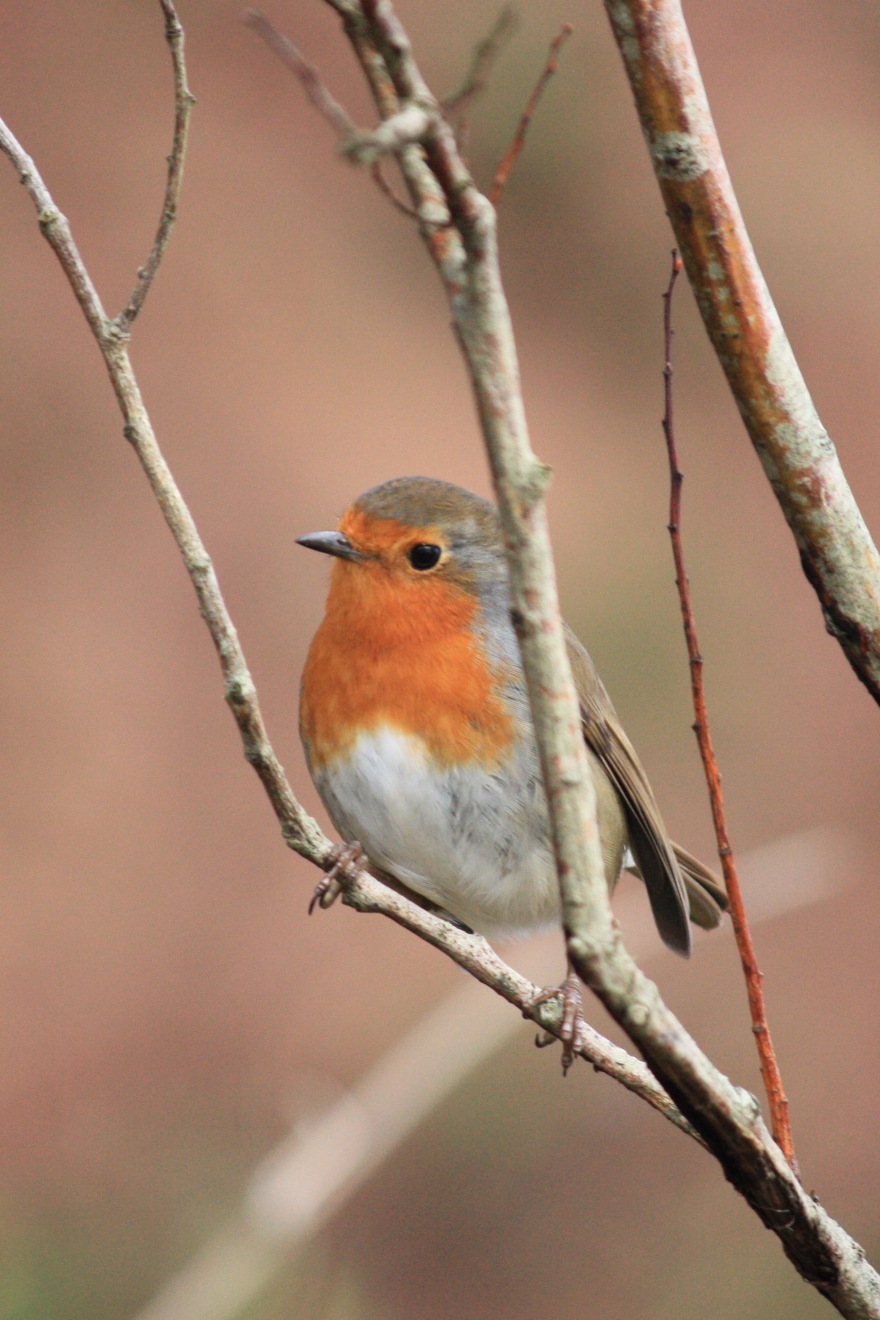 And then we both travelled on our different journeys.

There are many myths and legends associated with robins. One says that if a robin pecks at a window a death will soon happen. But there are also pagan connections with rebirth,  such as the myth of the killing of the Wren,  the little King of the Waning Year,  by the Robin Redbreast, the new King of the Waxing Year.
My favourite tells of the rebirth of the spirit , when after solstice, the darkness that has ruled since halloween, is overcome by the new light of spring.
And so, I wish you all a very Happy New Year filled with blessings and the  song of birds wherever you travel.

Like many seaside towns, Sidmouth in Devon has its annual Christmas swim in the sea on Boxing Day, December 26th. In recent years numbers have grown from about 50 brave souls to several hundred yesterday, braving sea temperatures of around 11 degrees.  I went armed with my camera, hoping to catch the crazy people dashing in and back out shivering, but the area was crowded and I couldn’t actually see anyone close up.

I did see some of the swimmers in the crowds beforehand, lots in fancy dress, but I don’t think a bunny suit or a grass skirt helped keep any of them warm!

Doubts had been cast about the event going ahead this year, gale force winds were forecast and there were concenrs about safety. Luckily, the day was mild and sunny and the Sidmouth lifeboat was launched just in case and at 11am in they went.

When it was nearly over, I managed to squeeze through close enough to prove that there really were people in the water!

Now of course those of you in the southern hemisphere think nothing of swimming in the sea at Christmas, but here even in August the chill can take your breath away. So who has had a December dip and if you have would you do it again? I have, but on Borneo where the water was like a lovely warm bath, and I would have to be in the tropics to do it again!

Watch out for the red dragon in Oscar Pearson’s video of the action here.

Merry Christmas to my dear friends in the blogosphere, thank you all so much for your kind visits and love this year. I’ve enjoyed visiting you and learning about your world and look forward to seeing you all in 2014.
Love, peace and best wishes
LG x
Is there enough love
can you open wide your heart
share with the lonely

On Exe and Clyst confluence

In the reserve of marshland

This post was inspired by a visit to Green Mackenzie. Although Seonaid focussed on the cold night, she made me think about writing some wintery haiku. I’m a long way south of Seonaid and winter has only just begun, so this photo was taken last January at Bowling Green Marsh, a nature reserve and resting place for migratory birds.  You can click for a bigger view,  I was too far away to get a clear shot, but I believe these are mostly Dunlin, Godwit and Oystercatchers. The estuary is known for its Avocets, the symbol of the RSPB.

If you don’t know Seonaid, I know you’ll find peace and inspiration here.

Killerton House and estate is a National Trust property a few miles east of Exeter. I’ve been wanting to see it decorated for Christmas, so after a manic day of shopping and wrapping gifts I checked the internet thinking that I might pop out tomorrow. This was at 4.30. I saw that today it would be open until six for the last time so that people could see the house in the evening light. I was there by five!
I’m having to use a fixed 50mm lens at the moment so my options are limited, even more because of the dim light, but I enjoyed capturing some of the tree decorations. 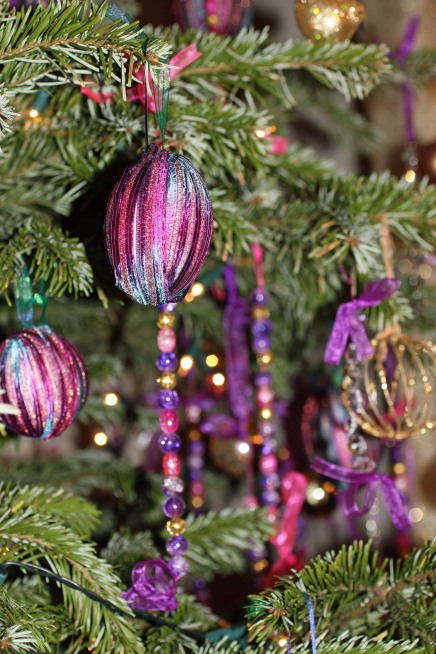 I don’t know how many trees they had, I lost count.

This is a glimpse of the dining room

The staircase was decorated with foliage and snow 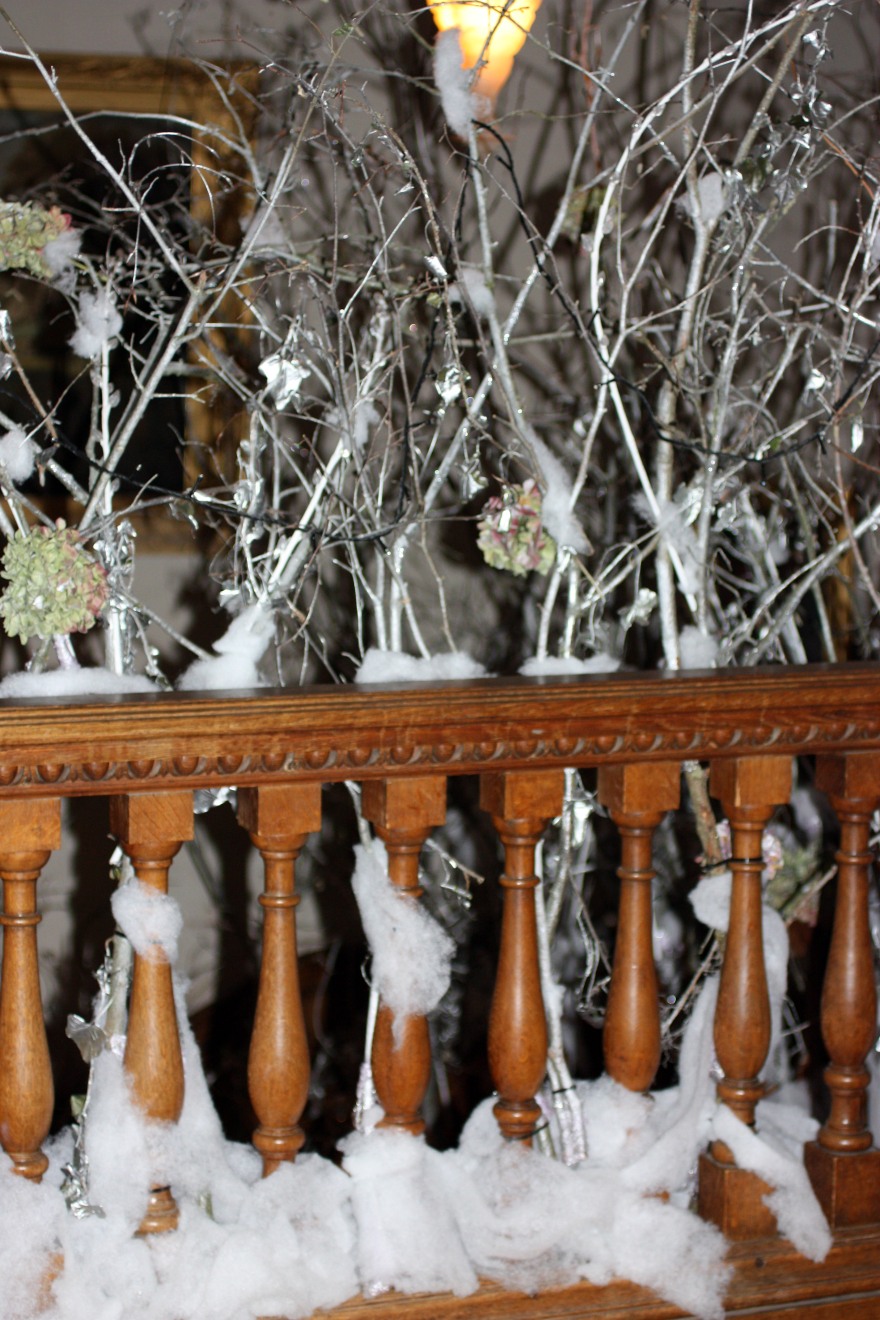 and the inner hall had this lovely barrow

Including these creepy ones 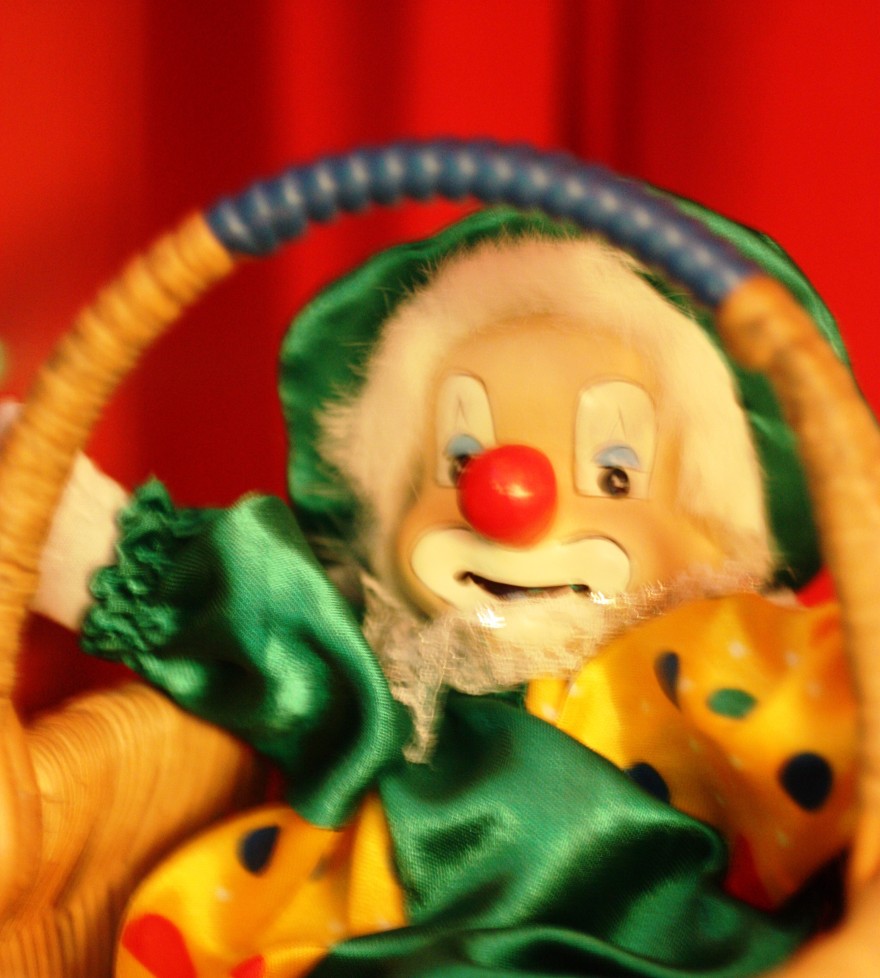 One of the trees in the hall

See how pretty the entrance hall is?

The walk back from the house to the old stable block entrance is about two hundred yards. It was really dark and I was on my own, so I was glad to hear the voices of a young family behind me. And seeing this beauty on my way was a real treat!

I hope you enjoyed my half hour visit, I was back home by six!

As I don’t have a photo of a partridge in a pear tree or a partridge anywhere, I’ve chosen one of several other creatures for you. In fact I don’t think I’ve ever seen a partridge, never mind photographed one, have you? 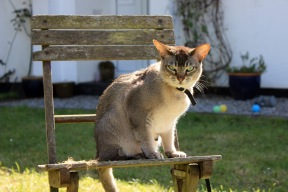 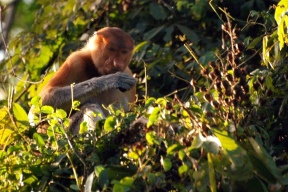 You can click for a bigger view and go to
http://dailypost.wordpress.com/2013/12/20/photo-challenge-one/ for lots more ‘Ones’.
Posted on December 19, 2013 Posted in PhotographyTagged Christmas, Christmas Tree, Photography, The Sunday post8 Comments

Jake posted a great Christmas tree animation but I can only produce simple today I’m afraid. Check him out, he’s very talented.

this long winter of neglect

listen to my bones

craving a cloak of soulskin